George Ligler ’71? Meeting his match? The idea was pretty far out in 1970. Forty-seven years later, though, the real glitch in the matrix may be that Fran Smith Ligler ’72 ever met hers.

Yet, through some fortuitous kismet, two of the finest minds to ever walk the halls at Furman–or any other university for that matter–happened to find themselves in C. Ray Wylie’s hyperbolic geometry class one late summer day in 1969. George was the hotshot math whiz upperclassman from Atlanta, while Fran was … enjoying college as an 18-year-old who found herself with juniors and seniors because she’d tested out of calculus.

“I had dated most of the freshman football team my first semester, and I was bored stiff,” Fran says, eyes twinkling. “He was that smart guy two people in front of me who I was afraid to talk to, and I needed some help so I asked one of his friends. And he butted in to help me. I went out with him twice, and I still wasn’t bored so I kept doing it.”

The first date was Jan. 9, 1970, and George quickly discovered the precocious teenager from Louisville, Kentucky, wasn’t like the other girls. Which was good, because the soon-to-be Rhodes Scholar, at the time the university’s fourth, wasn’t like the other boys. By 1972, they were married, and Fran graduated with degrees in chemistry and biology a year early so she could join him at Oxford University in London.

"I went out with him twice, and I still wasn’t bored so I kept doing it.” - Fran Ligler

There’s no truth to the rumors that the flight over was powered by their combined mental horsepower, though over the next four decades they would go on to impact the world in ways that are nearly as unbelievable while supporting Furman as few alumni have.

Though Fran says she “tried so hard to break up his grades,” George nonetheless had a perfect GPA when he earned his Bachelor of Science in mathematics from Furman. By 1975, he’d been awarded both a Master of Science and a Doctor of Philosophy in computer science. Not long after, Fran had a Doctor of Philosophy of her own in biochemistry, and they returned to the U.S. where they launched lives so remarkable it’s nearly impossible to overstate their impact.

George embarked on a long career building complex computer systems, highlighted by being a part of a pro bono expert panel that advised Congress on re-engineering census-taking and developing a revolutionary aviation safety system called Automatic Dependent Surveillance-Broadcast. ADS-B allowed pilots to see–and potentially avoid–other planes in flight for the first time. His work on those projects resulted in his 2017 election into the National Academy of Engineering, a prestigious professional distinction accorded to just 2,540 people. It also cemented his place as one of the finest engineers in the family.

That’s because Fran had been an academy member since 2005, when she became the third Furman graduate in the NAE. She started in academia, working at a medical school before landing a position with the Naval Research Lab, and after the couple moved to the Washington, D.C., area when George became a division vice president with Computer Sciences Corporation. Over the next 27 years there, Fran cemented herself as one of the finest world-changers in the family with pioneering work in biosensors. She developed a new chemistry for attaching biomolecules on sensor surfaces that allows them to better detect and identify biological warfare agents, environmental pollutants, infectious diseases, drugs and explosives.

“We realized that biological warfare agent defense was a major issue. We knew the technology that existed was not sufficient,” she remembers. “I was working with another person in my group, and he said we can make a better device. I said we can make better chemistry. So, the two of us got together, and he solved one problem and I solved the other.”

Her group was instrumental in producing tactical sensors for botulinum toxin and anthrax during Operation Desert Storm. By the time she left the Naval Research Lab she was one of the most renowned scientists and engineers in the world, achieving near-mythical status for her ability to solve problems that were supposed to be unsolvable and invent things that were supposedly impossible to invent.

“I’ve been told something was impossible three times, and every time I figured out a way to do it,” Fran says.

She has more than 400 full-length publications and patents to her name, a staggering number, including being part of a team that proved cranberry juice can actually prevent urinary tract infections. Her patents have led to 11 commercial biosensor products, and she’s been honored by two presidents: George W. Bush in 2003, when she was awarded the Presidential Rank of Distinguished Senior Professional, and Barack Obama in 2012, when Fran received the Presidential Rank Award of Meritorious Senior Professional.

Remarkably, though, nothing she’s achieved thus far tops joining the likes of Charles Townes ’35, Thomas Edison and the Wright brothers as one of 547 members, and only 22 women, in the National Inventors Hall of Fame. Furman Associate Vice President for Development Shon Herrick and Vice President for Academic Affairs and Provost and Professor of Chemistry George Shields attended her May induction ceremony at the National Building Museum in Washington, D.C., a black-tie affair that Shields compared to the Golden Globes.

“I just pretended that dress was walking across the stage, and I just happened to be in it,” Fran says. Earlier this month, George Ligler had his turn in the spotlight at the NAE national meeting, and the Liglers admit that even for them, 2017 has been a special year. But despite the rapidly diminishing list of possible professional accolades, it’s clear the two have no plans to slow down.

George continues to run GTL Associates, the consulting firm he established in 1988. Since 2013, Fran has had access to world-class resources and students as the Lampe Distinguished Professor of Biomedical Engineering at the University of North Carolina/North Carolina State Joint Department of Biomedical Engineering, a unique collaboration between the N.C. State College of Engineering and the University of North Carolina School of Medicine. They live in Fuquay-Varina, North Carolina, a fast-growing suburb that is filled with young professionals. They have enough room for Fran’s two horses, and family live nearby.

In the spare time that it seems neither could possibly have, George serves as the pit crew as Fran competes in physically demanding endurance horse races. They also make time to dote on seven grandchildren.

Their daughter, Amy, attended Wake Forest and Duke Law School and is a biotech intellectual property attorney in Bethesda, Maryland, while son Adam ’05 followed in his parents’ Paladin footsteps before becoming a physician in Charlotte, North Carolina.

They express mock disappointment that Amy didn’t also go to Furman, because if every Ligler ended up in purple that would suit them just fine. George and Fran have been tireless champions and supporters of the university for decades, with Fran on the Furman Board of Trustees for six years and George chairing the Furman Standard fundraising initiative for faculty development, among many other things.

“(Our professors) had a tremendous impact on us, a very positive impact,” George says. “(Wylie) would put a proof on the board and say, ‘Isn’t that beautiful? Every piece absolutely essential and in the right place!’ And he meant it. He was very inspirational. We want to make sure that future generations of Furman students have the type of faculty that we had, because we know of the intrinsic value.”

Since 1988, Fran has annually sponsored a summer intern from Furman, and when she was at the Naval Research Lab she facilitated research sabbaticals for Furman biology professors Laura Thompson and Lew Stratton. Next month she will host a group of Furman students at her labs in Raleigh and Chapel Hill, North Carolina.

“She was always really, really open to helping Furman, not just as a trustee but as a place where students could go and work and get experience, and that was extremely important,” says Thompson, who got to know Fran well through horse riding. “She has been so consistent over the 30 years that I have been here.”

Fran sometimes threatens to retire but claims George won’t have it. One look at her face lighting up in wonderment when asked what she’s currently working on, however, reveals the true reason.

“I have a cool new invention I’m pretty excited about!” Fran says before launching into a description of programmable, inexpensive pumps for printers and other electronic devices made, somehow, out of laminated paper. George is certain it will be yet another creation to go commercial, and, in the meantime, they have trips planned to Prague, Switzerland, and a little place on a Caribbean beach in January to celebrate, as they do every year, their first date.

Her answer? “He's still not boring.” 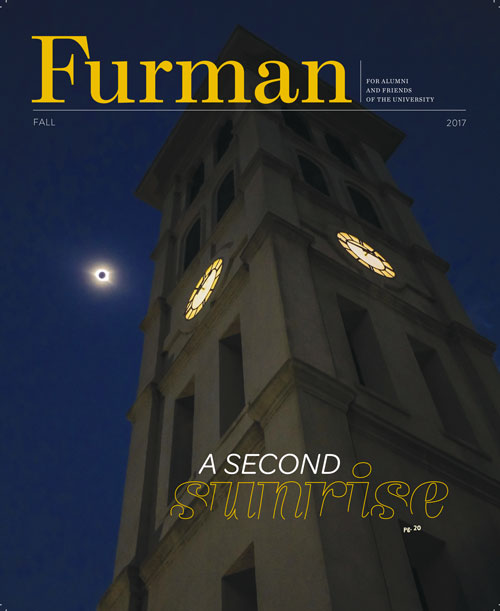