The Republican presidential candidates met in Simi Valley, Calif., Wednesday night for their second nationally televised debate. To help us understand who won, who lost and how it might affect the race going forward, we asked Dr. Sean O’Rourke, a professor of rhetoric in the Communication Studies Department at Furman, if he could give us his thoughts on the debate. The resulting Q&A revealed that the debate lived up to its hype. 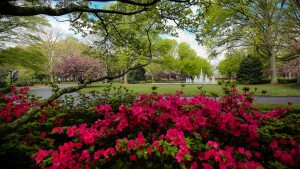 Remembering a lone voice against the Vietnam War

Fifty years ago, the U.S. Congress passed the Tonkin Gulf Resolution, which opened the door for America’s involvement in Vietnam. Among the two dissenting voices in Congress was Sen. Wayne Morse of Oregon, who gave an impassioned and historic speech against the resolution’s passage. Furman communication studies professor Sean O’Rourke will examine the speech and Morse’s prescient arguments against what would become the most controversial war in U.S. history when he speaks at the university’s High Noon fall lecture series Wednesday, Oct. 29 at the Upcountry History Museum-Furman. His lecture—“50 Years Later: Senator Wayne Morse, the Gulf of Tonkin Resolution and the Vietnam War”—begins at noon.

Since President Lyndon Johnson signed the Food Stamp Act into law 50 years ago, it has helped reduce childhood hunger and malnutrition, created a support system for not only the working poor but also seniors and disabled people, and provided many with the reinforcement they needed to attend school and job-training centers. But, according to the U.S. Department of Agriculture’s latest statistics, 48 million Americans don’t know where their next meal is coming from or how they will pay for it. In an op-ed he co-authored for The Greenville News, Furman communication studies professor Sean O’Rourke examines the problem.

Remembering an act of courage

On March 2, 1961, a large group of high school and college students gathered at Zion Baptist Church in Columbia. Their purpose was to peacefully confront the state government and the people of South Carolina about their grievances, and ask that “the laws which prohibited Negro privileges in this state to be removed.” The protesters were arrested, but the U.S. Supreme Court would ultimately reverse the convictions and strengthen free speech rights in America. Furman communications professor Sean O’Rourke co-authored an op-ed in The Greenville News that commemorated the 50th anniversary of that important ruling.

In "Profiles in Courage," John Kennedy wrote that political courage is about character and the willingness to stand up in the face of mob hatred, to fight for what is good or noble in all of us, to sacrifice and suffer for what is right.  It was 50 years ago that James Meredith displayed that kind of courage when he became the first African American student to attend the University of Mississippi. Sean O’Rourke, a Communication Studies professor at Furman, remembered that time with an op-ed he co-authored in the Memphis, Tenn., Commercial Appeal.

Furman hosted a debate watch in conjunction with the first of this year’s presidential debates from Denver. The event, sponsored by Furman’s College Republicans, College Democrats, Cicero Society and the Debate Club, featured interactive polling with the student body and was followed by a question-and-answer session with Communication Studies professors Sean O'Rourke and Brandon Inabinet.  Several members of the local media showed up to see what Furman students thought about the debate.

Fifty years ago this week the United States Supreme Court decided Baker v. Carr, one of the most important voting rights cases of the last century. It also determined that the right to vote and to have that vote count for something is at the very heart of a democracy.  To commemorate the anniversary of the case, communication studies professor Sean O’Rourke co-authored an op-ed for The Commercial Appeal in Memphis, Tenn.