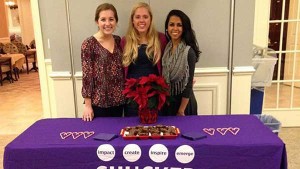 Because of the retirement community’s partnership with nearby Furman, residents of The Woodlands at Furman have access to many unique opportunities. There is no better example than a lecture series organized last fall by students Olivia Baddley ’17, Erin Mellor ’17, and Karina Nazareth ’17 for their Shucker Leadership Institute (SLI) Leadership Challenge Project. […]

Russia in the Time of Putin

It has been a year since President Vladimir Putin reclaimed Crimea as a part of Russia, which has led to a raft of economic sanctions against the nation and heightened tensions across Europe and the rest of the world. But as Russia backs separatist movements in Ukraine and is behaving more aggressively towards NATO, is there even more tension to come? Furman political science professor Michael Bressler will talk about Putin and Russia in the post-Soviet era when he speaks at the university’s High Noon spring lecture series Wednesday, April 8 at the Upcountry History Museum-Furman. His lecture, “Russia in the Time of Putin,” begins at noon.