CLP: The Refugee Crisis: Perspectives from Both Sides of the Atlantic 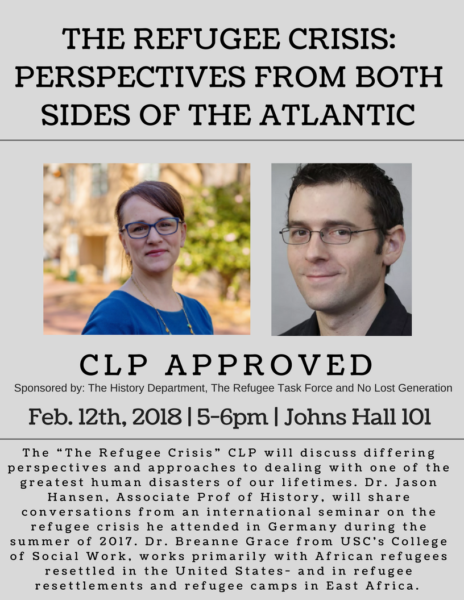 In 2011, the outbreak of civil war in Syria displaced over 13 million people, including five million refugees who fled abroad. This displacement provoked a global humanitarian crisis, as states struggled to accommodate such a massive number of migrants. In the U.S., debate broke out over the appropriateness of allowing tens of thousands of refugees to enter the country, with humanitarian responsibilities juxtaposed against concerns about terrorism, security and the ability of the refugees to integrate into American society. Europe faced a crisis of epic proportions, as millions of migrants streamed across borders in search of safety and asylum. While many states such as Croatia and Hungary took measures to stem the flow of refugees, Germany agreed to accept over one million refugees. “The Refugee Crisis” addresses differing perspectives (German and U.S.) and approaches to dealing with one of the greatest human disasters of our lifetimes. The event is sponsored by the Department of History, The Refugee Task Force, and No Lost Generation.