CLP: Every Campus A Refuge: A Small College’s Civic and Curricular Engagement with Refugee Resettlement 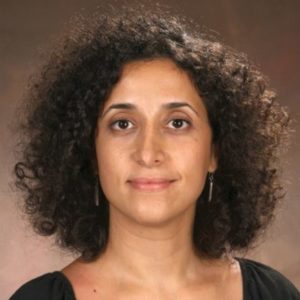 A first-generation Palestinian born and raised in Jordan, Abdo is Associate Professor of English at Guilford College in Greensboro, N.C.  Her teaching, research and scholarship focus on Arab women writers and Arab and Islamic feminisms. She has also published poetry, fiction and creative nonfiction; her public essays focus on the intersection of gender, political identity, and vocation.

Abdo is the founder and director of Every Campus a Refuge (ECAR), an initiative which advocates for housing refugees on campus grounds and assisting them in resettlement. Thus far, Guilford College has hosted 33 refugees (18 of them children) from the Middle East and Africa in campus houses and assisted them in resettlement in Greensboro.

Her talk deals with the Syrian Refugee Crisis and ways that civil society has addressed it. Participating students will receive a powerful experiential education on pressing global issues (the refugee crisis and forced displacement) and local concerns (immigrant and refugee life in Greenville) while actively engaging in real-world problem-solving discussions.

The ECAR initiative has been recognized at the White House and the Sixth Annual President’s Interfaith and Community Service Campus Challenge Gathering and has been featured on NPR’s All Things Considered and in The Washington Post.  ECAR has been implemented by six other campuses and has won the Gulf South Summit’s 2017 Outstanding Service-Learning Collaboration in Higher Education Award and The Washington Center’s 2017 Higher Education Civic Engagement Award.  The Every Campus A Refuge minor piloted at Guilford this fall. Recently, Abdo has been speaking widely at conferences and college and university campuses about ECAR.