Furman University has received a $25 million grant from The Duke Endowment to expand and advance The Furman Advantage, the university’s transformational approach to offering every student a pathway toward a meaningful and valuable college experience.

“The Duke Endowment’s founder, James B. Duke, had a vision for the future that he expressed through philanthropy,” said Minor Shaw, chair of the Endowment’s board. “The goals of The Furman Advantage echo Mr. Duke’s forward-thinking, innovative approach. We are proud to play a role in Furman’s efforts to build something truly special in higher education.”

The Furman Advantage provides every Furman student a personalized four-year pathway to graduation with academic advising, mentoring and career guidance, coupled with engaged learning experiences, such as undergraduate research, internships or study away, and reflection to make meaning of all of these elements. 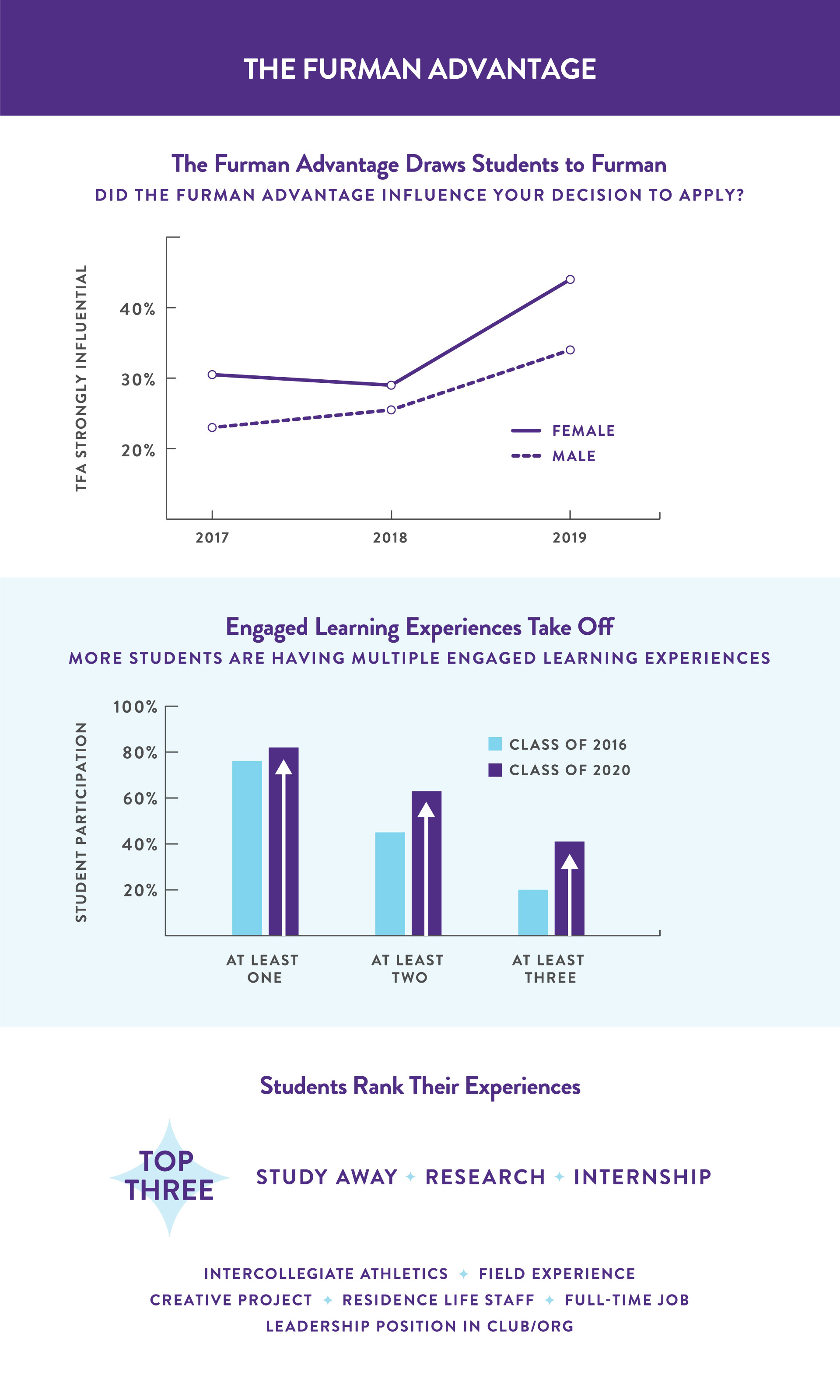 “Thanks to the generous support from The Duke Endowment, The Furman Advantage has become integral to Furman University. We are The Furman Advantage,” Furman University President Elizabeth Davis said. “Each individual student has the opportunity to receive transformational experiences and guidance on a pathway to success, so the quality of their education is reflected in the quality of their lives long after they graduate.

“We are extremely grateful that The Duke Endowment recognized and funded our early ambitions, and we are thrilled that they have deemed our early successes worthy of their continued support,” Davis said. “Their financial investment is making a difference in the lives of students and their families that will be felt for generations to come.”

The commitment of The Furman Advantage to reach every student is unique, said Brandon Busteed, president of University Partners and global head of Learn-Work Innovation at Kaplan.

“I can’t think of a single university who has committed to making sure that internships, study away and research are available to every single student,” said Busteed, who previously served as Gallup’s executive director of education and workforce development. “That commitment continues to be the real magical element of The Furman Advantage, in my opinion.”

“Furman has not only implemented a unique plan for all its students, the university is continually measuring and assessing progress,” said Bill Barnet, chair of the Endowment’s Committee on Educational Institutions. “Furman’s planning and measurements create a blueprint for this campus and for others to follow.”

All these factors add up to students who are more likely to graduate, to think their education was valuable, to feel more affinity for Furman, and to start their post-graduate careers in jobs or graduate studies that they find fulfilling.

With the 2016 grant from The Duke Endowment, Furman created an administrative infrastructure with positions to support faculty and students, including an associate provost for engaged learning and an associate dean for mentoring and advising as well as positions that oversee internships, faculty career and professional development, student career engagement, and student equity and inclusion.

Furman also used the grant to expand funding for engaged learning experiences; create robust assessment protocols to measure, evaluate and adjust programming; and support the small-scale pilot test of Pathways, an intentional mentoring and advising program for first- and second-year students that was designed to set the foundation for the four-year experience by addressing themes related to academics, engaged learning, career development, reflection, and diversity, equity and inclusion.

“This is not just a marketing message and a value proposition,” Busteed said. “There’s a tremendous amount of intentionality. The whole university has said, ‘This is who we want to be.’”

The new funding will allow the university to continue developing all the programs that started with the first grant: expanding and enhancing engaged learning experiences, enhancing the mentoring network and expanding career engagement activities through the Malone Center for Career Engagement and through academic departments to create career and professional development activities for students that are specific to their interests and disciplines, said Ken Peterson, vice president for academic affairs and provost.

The funds will also increase access and lower barriers to engagement for all students. This could mean increasing a student’s sense of belonging; providing funds for premiere internships, undergraduate research or study away; and funding student trips to meet with alumni mentors working in specific industries, said Connie Carson, vice president for student life.

Pathways, which has been pilot tested and enhanced over the past four years with a small group of students, is currently under consideration by the faculty to expand it to all students. If it is accepted, Peterson said, the new funding from The Duke Endowment will finance it for the first five years.

Key to The Furman Advantage’s success is the integration of academic affairs and student life, Peterson and Carson said. For example, in the Pathways program, students are encouraged to think of their career potential by considering what they learn in classrooms and in their extra- and co-curricular activities and giving them real-world practice with their education.

The integration of academics and student life is unique, said Michelle Horhota, associate dean of mentoring and advising. Furman has avoided the administrative silos common on many university campuses and has worked hard to create and practice a shared vocabulary.

Frequent assessment has been a hallmark of The Furman Advantage. Students in the Pathways program report higher satisfaction scores for advising than students not in Pathways. The early pilot data also suggest that Pathways erases gaps between majority students and students from low-income families, first-generation college students and students of color in terms of

Among students in the class of 2016, which predates The Furman Advantage, 65 percent participated in two or more experiences and 28 percent in at least three. Among the class of 2020, which became sophomores when The Furman Advantage launched and the Center for Engaged Learning began facilitating and assessing experiences, the numbers rose to  81 percent and 65 percent, respectively.

One early success of The Furman Advantage was the ability to fully fund summer undergraduate research projects, extend funding for internships and increase need-based funding for study away.

“As long as a student and a faculty sponsor turn in a high-quality proposal on time, we fund the summer research project or internship experience,” said Beth Pontari, associate provost for engaged learning. “High-quality” experiences are those that impacted students’ worldview, related to their post-graduation plans and applied what they learned in the classroom.

“We’re not turning students away because funding is scarce and we have to prioritize by student seniority or by students who have already had an experience. That’s a game-changer from where we were five years ago,” she said.

Above all, Furman has developed The Furman Advantage in much the same way the university encourages its students to approach learning and life.

“We learn, we experience, we reflect and we adapt,” Davis said. “We have applied the same hallmarks of a liberal arts education to the way we provide an education. We are excited about the progress we’ve seen so far, and about where the next five years takes us.”

Protected: ‘It’s an important time to give back’

In its five years, the Medical Legal Partnership has increased access to legal assistance for hundreds of patients whose medical problems are linked to a social or legal challenge.