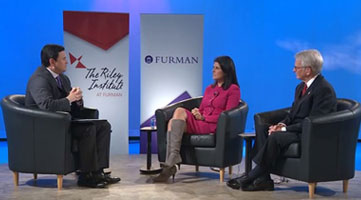 Sen. Pinckney, who served as pastor of Mother Emanuel African Methodist Episcopal Church in Charleston and was among the nine people killed in the shootings that took place at the church in June, was the posthumous winner of the Wilkins Award for Excellence in Legislative Leadership.  Haley and Riley were joint winners of the Award for Excellence in Civic Leadership.

As part of the program, Haley and Riley sat down together for a recorded interview about how they worked with other leaders in South Carolina in the wake of the massacre at Mother Emanuel church.

You can watch the conversation here.  The video will also air on SCETV’s “Palmetto Scene” Thursday, Jan. 21 at 7:30 p.m.

For more information about the Wilkins event, visit the Furman website.