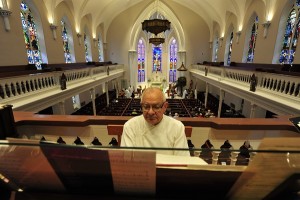 After 35 years as Organist and Director of Music at the historic St. Matthews Lutheran Church in Charleston, S.C., W. Douglas Ludlum is stepping down. The 73-year-old stalwart graduated Furman in 1965, then went on to Union Theological Seminary in New York. He also spent time in Vietnam, and later developed a love for the musical traditions of the Church of England when he studied at the Royal School of Church Music in London. Adam Parker of The Post and Courier pens a tribute to Ludlum who says, “I’ve had a very fortunate life.”