Because of the retirement community’s partnership with nearby Furman, residents of The Woodlands at Furman have access to many unique opportunities. There is no better example than a lecture series organized last fall by students Olivia Baddley ’17, Erin Mellor ’17, and Karina Nazareth ’17 for their Shucker Leadership Institute (SLI) Leadership Challenge Project.

“We all have good relationships with our grandparents, and being away at school we miss that interaction,” Baddley said. “Also, the Woodlands, being so close, why not go over there?”

But what to do once they arrived? Woodlands residents already have the Osher Lifelong Learning Institute at the James B. Duke Library as well as discounted entry to Paladin sporting events and the Physical Activities Center.

Those all require residents to come to Furman, however, so what if Furman came to them? And with that, “Furman Crossing” was born.

“I contacted professors . . . just to kind of get an idea of who would be interested to come and speak at the Woodlands,” Baddley said. “Most of them were professors we had had in the past and really liked.”

Tevis, who recently won a prestigious Pushcart Prize and published her second book, The World Is on Fire, shared her expertise on essay writing with a lecture called “The Atomic Boom: A Writer’s Adventures.” Tollison presented “Furman University: A Brief History.”

Bressler switched gears to discuss “The History Behind Conflict in the Middle East,” while Vick educated people on the Greenville Chorale, which he has conducted since 1981.

“Harry Shucker is a personal friend of long standing. I wished to affirm my friendship with Harry and to support the SLI,” Vick said. “My presentation was well-received, and, I think, appreciated and enjoyed by the residents. I know several former Furman faculty colleagues who reside there.”

SLI is named in honor of Dr. Harry Shucker, who retired in 2007 from his position as vice president for student services after 40 years at Furman. Students who are chosen to participate become Shucker Fellows and are required to complete a Leadership Challenge Project. Formerly called Passion Projects, these student-led initiatives have long been part of the program, but they did not become a requirement of until the 2014–15 academic year.

The goal of the Shucker Fellows program is that as freshmen, students gain a culmination of insights about their interests and leadership strengths and weaknesses through a series of educational sessions. Once together, Baddley, Mellor, and Nazareth quickly realized they shared an affection for older members of the population and an idea was born.

Mellor, a communications and English major who came to Furman from Irvine, Calif., estimates about 40 people attended the talks.

“Bing Vick’s lecture really resonated with the gathered residents as many knew him personally,” she said. “The feedback from the Woodlands residents was really positive.”

Baddley’s aunt and uncle, Cathi and Kerry Cough, lived in the Woodlands at the time and agree with Mellor’s assessment.

“We all enjoyed it. We had some excellent choices for people that presented, and we had varying sizes crowds but it was always a very decent crowd, and several times it was a room full,” Cathi said. 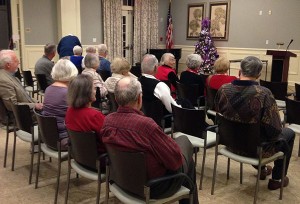 Bianca Forte ’16 who was student director at the time, didn’t have the opportunity to participate in a challenge, but her enthusiasm for implementing the program nearly filled the void. “It was my passion to not only re-introduce the Passion Projects (now LCP’s) but to also strengthen the curriculum, so that students, faculty and staff, and the Greenville community are included,” said Forte, who is now the student intern for the Shucker Center for Leadership Development.

“We give students tools and strategies their freshman year, and then in their sophomore year, we have monthly meetings to evaluate whether they are meeting requirements and also to teach them how to implement strategies by collaborating with the community and with their peers.”

Baddley, a business major from Simpsonville, S.C., accomplished her objective of becoming a Shucker graduate with the project. That wasn’t all she gained, however.

“Making a bridge between Furman and the Woodlands—that was our goal, which I think we achieved given the turnouts that we had, the joy that I got out of it, and the response from Woodlands residents,” she said. “After the lectures, many residents thanked us … It was really a blessing and good to hear. Being part of SLI turned out to be such a valuable couple of years for me.”

What we can learn from Native American politics

Danielle Vinson, professor of politics and international affairs, explains the relevance of treaties between Native American tribes and nations and the U.S. government.

Petal prowess: Oconee bell wildflowers might be one giant organism

Ashley Morris and her biology students are studying whether or not all the Oconee bell wildflowers are actually one genetically identical organism.

Gavin George ’25 hopes his passion for music can harmonize with his pre-med studies at Furman.