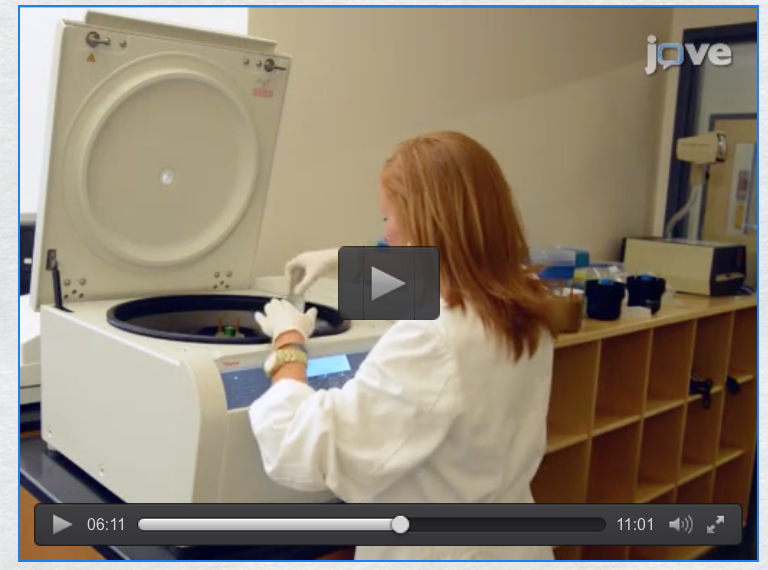 The accolades keep coming for the Furman biology department’s ground-breaking research into the chemical processes behind T-cell activation.

Early in the summer, the Journal of Visualized Experiments (JoVE) sent a video team to campus to document a procedure developed by biology professor Jason Rawlings ’96 that uses a flow cytometer to track the decondensation of T-cell chromatin. Decondensation allows the cells to activate to attack pathogens.

“It’s huge for Furman. It gets us on the map,” Rawlings said. “It shows Furman students are doing some top-end research.”

JoVE, a peer-reviewed scientific video journal, is devoted to publishing scientific research in a visual format to help researchers improve on the “time and labor-intensive nature of learning new experimental techniques.” In this case, that innovative technique was using a florescent antibody that could be seen binding to histone inside chromatin, and being able to monitor it opened the door for Rawlings and his team of Kellie Bingham ’14, Megan Lee ’15, Jenna Meredith ’15, and Taylor Mitchell ’15 to make a discovery that previously earned Furman a national award and publication in the prestigious journal Molecular Immunology.

Being able to read these signals allowed Bingham and her classmates to make a big jump in a research project Rawlings had started as a Postdoctoral Fellow at St. Jude Children’s Research Hospital and brought with him to Furman when he was hired in 2010. Using the technique, they determined that intracellular calcium–calcium inside the cell–is both required and sufficient for chromatin decondensation.

“The implications that are so significant about this project is that before they didn’t realize the mechanism by which T-cell activation fully occurred, and if this was able to be explained further then you can either shut T-cells off in the case of auto-immune diseases or even turn then on to help boost your immunity in terms of cancer and things like that,” Bingham, now a student at the Medical University of South Carolina, said. “So it’s a really big deal to learn more about how activation occurs.”

How big? The findings earned national accolades at the 53rd Midwinter Conference of Immunologists in Asilomar, Calif., where the team was honored with the Council Award, given to the most outstanding graduate school poster. This would be a remarkable accomplishment for a school’s graduate students; for undergraduates to win is almost unheard of, as is a peer-reviewed paper being published in Molecular Immunology.

“That journal has papers from UPenn. That’s an Ivy League school. These are all top-notch research institutions,” Rawlings said. “Grad students would love to get their name on a paper in this type of journal, and here we are as undergraduates doing it.”

“Calcium mobilization is both required and sufficient for initiating chromatin decondensation during activation of peripheral T-cells” was published in December of 2014, and it marked the first time a predominantly undergraduate institution has been represented in the journal in more than a year, according to Rawlings. Read the team’s paper here.

Bingham, a biology major from Cayce, S.C., credits Rawlings for not only having the initial idea but also for teaching her and her teammates the intricate technical skills required to obtain accurate data. And she’ll never forget the moment they found what they were looking for.

“That was a very a-ha moment, at least for me,” she said. “That was a pretty exciting day in the lab … Seriously, the caliber of professors (in the biology department) is just unbelievable. Everyone is just so dedicated and wants you to succeed and goes above and beyond the classroom time.”

Rawlings became interested in returning to his alma mater when he saw the Charles H. Townes Science Center, which didn’t exist when he was a student. He realized right away it would give him and his students tremendous opportunities.

“For me, Furman had to be a place where I could not only teach but still be able to do research, and meaningful research—not just the kind of research that ends up as a presentation at a meeting somewhere and doesn’t go anywhere after that, but research that can be published in a real journal that’s peer reviewed, that would give visibility not only to myself but to the institution,” he said. “And when I interviewed for the job here I realized this could happen at Furman … The students have to be bright. The things I require my students to do in a lab, I feel comfortable requiring it of Furman students.”

Learn more about the Furman biology department or view the Jove video.

MayX Snapshot: Meet the beetles – and the dragonflies, and the grasshoppers