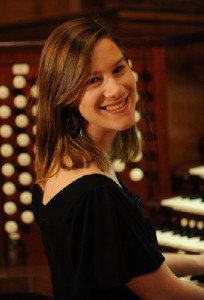 The recital is open to the public and is presented by the Furman Hartness Organ Series. Tickets, available in advance or at the door, are $12 for adults, $10 for seniors and $5 for students.

Caroline Robinson is considered one of the rising stars of her generation in the world of organ performance. A graduate of the prestigious Curtis Institute of Music (Philadelphia), she was also the recipient of a Fulbright Scholarship for organ study in France with internationally-known organists Michel Bouvard and Jan Willem Jansen. Robinson is pursuing a master’s degree in organ performance at the Eastman School of Music, and she also serves as Associate Organist for Third Presbyterian Church, Rochester, N.Y.

For more information, contact the Furman Music office at (864) 294-2086, or email the department at FurmanMusic@furman.edu.