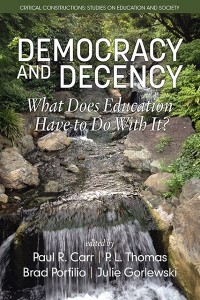 Furman University Education Professors Michael Svec and Paul Thomas have collaborated on a new book, Democracy and Decency: What Does Education Have to Do With It? (Information Age Publishing).

Svec was one of 20 international scholars selected to contribute a chapter to the book. Thomas co-edited the book with Paul Carr, Julie Gorlewski and Brad Porfilio, the latest volume in the series, Critical Constructions: Studies on Education and Society.

Democracy and Decency advances the notion of decency in relation to democracy and is underpinned by an analysis of meaningful, critically-engaged education. It addresses questions such as, how can we teach for and about democracy to alter and transform the essence of what democracy is, and, importantly, what it should be? If democracy is intended to be a legitimating force for good, how does education inform democracy?

Svec’s chapter, “Democracy and Decency Supporting Science Teaching,” discusses ways that the science classroom culture can be redefined to not only model the nature of science through instruction but also to model democratic principles.

Svec was an assistant professor of education at Rockhurst College in Kansas City before joining the Furman faculty in 1998. He earned a bachelor’s degree in physics from the University of Illinois-Urbana and a Ph.D. in curriculum and instruction (secondary science) from Indiana University-Bloomington. Svec previously served as a Fulbright Scholar in the Czech Republic teaching science education courses at Ostrava and Palacky Universities in 2005.

Before joining the Furman faculty in 2002, Thomas taught high school English in rural South Carolina. He earned undergraduate, master’s and doctoral degrees in education from the University of South Carolina.

He was the 2013 recipient of the George Orwell Award presented by National Council of Teachers of English. A collection of essays that he co-edited, De-Testing and De-Grading Schools, was named an Outstanding Academic 2014 title by Choice magazine.

He is a column editor for the English Journal, a publication of the National Council of Teachers of English and has written commentaries for the Washington Post, The New York Times, The Guardian, Education Week, The State, and The Greenville News.

Read Thomas’ blog at https://radicalscholarship.wordpress.com, and visit the publisher’s book site at www.infoagepub.com.