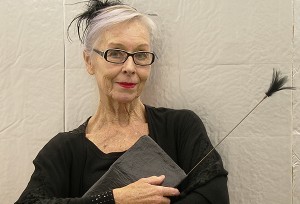 We live in a closed world, blocked by objects—some solid, some symbolic, all immovable. Or so we think.

Janke Klompmaker, Furman’s first True Inspiration Artist in Residence, seems to be exposing these barriers as self-imposed illusions with her unique form of installation art, a genre of location-specific, three-dimensional works that are designed to transform perception of a space.

“My theme is mostly that I make things light,” she says, “in weight and also in meaning.”

Klompmaker, who is Dutch, arrived in South Carolina on Aug. 28, compliments of a chance meeting with Furman art professor Michael Brodeur five years ago and two significant gifts to the art department. Duke Endowment funds were used to build her a studio, while seed money for the residency itself was donated by the family of True Harrigan ’13, who graduated with an art degree.

“She has an impressive background of installations and residencies, so we’re very, very pleased to have her here,” Brodeur said. “Her works cover various media—sculpture, drawing—and she combines these things into really poetic installations.”

Klompmaker is staying at the The Magnolia Inn in Travelers Rest, and in true European fashion she rode a bicycle to Furman to work in her installation, which was unveiled Saturday with a commemorative procession that began at the Place of Peace. The procession itself was a symbolic journey of a wandering population carrying their “homes.” Accompanied by a percussion ensemble organized by Furman music professor Omar Carmenates, participants carried illuminated paper houses Klompmaker created with Furman art students to the Bell Tower and back to the Roe Art Building, where they got their first look at her installation “You’re Welcome, We’re Glad You’re Here.”

In what was once a storage room rests a wooden frame built in the shape of a miniature house. It’s “walls” consist of hanging paper drawings that allow air, light, and sound to pass easily through, but there is only one proper doorway. 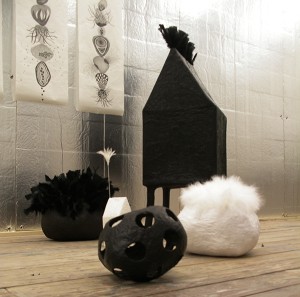 “(The walls) are moving, and you can go in it and look at the drawings because the paper is transparent . . . and when there’s a good light in it on the outside you can also see the drawings,” she said.

Klompmaker was inspired by the Syrian refugee crisis in Europe which has displaced more than nine million people, and the ongoing immigration debate in the United States. What is a home? And why are so many unable to find one?

“Europe makes a problem of it to welcome the people. Part of them do; part of them close their borders,” she said. “It’s really tragic what is going on there, and when I came here it was so fresh, all the tragedy I feel. People are so warm and welcoming to me here. In a way it got to me to my theme.”

Paper is Klompmaker’s primary medium, which she uses in many disciplines but most often plasters over everyday objects—stones, chairs, or, in this case, miniature houses. After it dries, the paper cast is removed, resulting in a visual representation of the item without the density.

Nearly weightless, the casts are then combined with things from nature, and in an attempt to engage all of the senses Klompmaker will also often add an abstract element such as light, sound, or even smell. Feathers are a key component of the pieces in her installation.

“I saw the films of the fugitives walking through the land, thousands of people and children, and thought to myself that if they were birds they’d just fly away.” she said.

Location is generally her starting point, though this time Klompmaker had an idea before she got to Furman.

“Mostly I come very empty to a place, see what’s happening, and I react. That’s my way of working,” she said. “But I thought, well, let me take a few of my drawings with me, because in the beginning if I don’t know what to do I can draw and then inspiration will come … I had the idea that one day, when I have enough, I want to make a house of it, a very open house.” 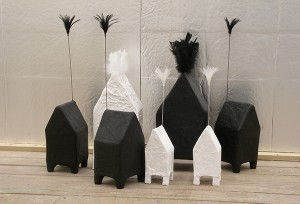 Brodeur met Klompmaker at the Helene Wurlitzer Foundation residency in Taos, NM. They became friends and stayed in touch, and when the opportunity to bring an artist to Furman presented itself she was the top of his list of potential invitees.

“The constant on Janke’s work is the human quality of empathy,” Brodeur said. “She arrives at a place, and she finds this empathy for the residents who are there, the political or economic differences we see there . . . Because it’s not pleasantly pictorial, because it’s not a lovely landscape with no metaphorical meaning, a lot of people don’t want to embrace it because it takes time to look at it and absorb it and to really reflect. You have to be able to put art in the context of what’s happening within your world, and if you persist in putting it in its own little niche of something that only titillates the visual senses, what makes you feel happy for the moment, then you’re never really going to get the reason that significant artists make work.”

“I think we have to welcome everything, just welcome life and people, but it’s not so in the world,” Klompmaker said. “But I can make my little dream in my heart where things are light and you can be happy.”

She will be on campus until Dec. 17. For more on her art, visit her website or find her on YouTube.

Find out more about the Furman Art Department.