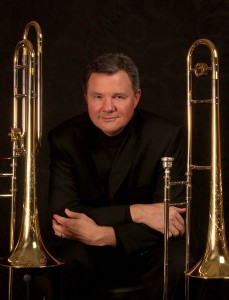 The Furman Jazz Ensemble and Jazz Combos will present their fall concert Friday, Oct. 30 at 8 p.m. in Daniel Recital Hall on the Furman University campus.

Part of Furman’s Cultural Life Program, the concert is open to the public. Admission is $5 for adults and $3 for students. Tickets are available at the door.

The concert will be conducted by trombonist and Furman music professor Stephen Wilson. It features compositions by Wilson, Oliver Nelson, Don Menza, Count Basie, and others.

Former director of jazz studies and brass studies at Brevard College and a performing artist/clinician for the S.E. Shires Co., Wilson has an extensive career in the professional world. He began his career as a freelance musician in the San Francisco area before working as lead/solo trombonist for the house band at Harrah’s Lake Tahoe Resort Casino. He has performed with Frank Sinatra, Tony Bennett, Sammy Davis Jr., Natalie Cole, George Benson, and Jay Leno, among others.

Wilson has been a member of the Greenville Symphony Orchestra since 1986 and has performed with numerous orchestras and chamber ensembles in the Southeast. His arrangements for trombone ensemble have been performed at the University of South Carolina, the Southeast Trombone Symposium, and the International Trombone Festival. He was twice named best trombone at the world famous Pacific Coast Jazz Festival in Berkeley, Calif.

Wilson has served as clinician and soloist at workshops and festivals across the United States. He has performed with the national touring companies for A Chorus Line, Sugar Babies, Annie Get Your Gun, 42nd Street, The Producers, Annie, Chicago, Sweet Charity, South Pacific, Dream Girls, White Christmas, 9 to 5, and Young Frankenstein.

For more information about the event, contact the Furman University Music Department at (864) 294-2086, or email the department at FurmanMusic@furman.edu