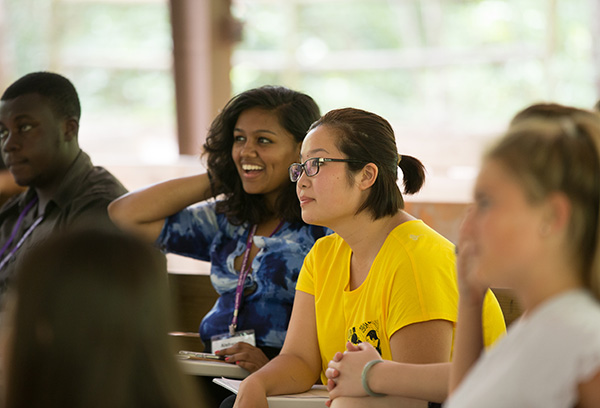 When Ahmed Al Ameri ’19 heard line dancing was on the agenda for international student orientation, he was a little apprehensive.

“I’ve seen it in movies,” said Al Ameri, a native of Abu Dhabi. “I thought at first it was silly.”

Within one week of arriving to South Carolina, Al Ameri had already surprised himself.

“Line dancing is actually a lot of fun,” he said. “I can’t wait to show my friends dances from my home.”

Al Ameri was one of 31 international students from 15 countries who gathered at Asbury Hills Camp near Caesar’s Head State Park for nearly four days of off-campus orientation, which included team-building activities, mock classes (including homework assignments) and outdoor recreation.

The program gives newly arrived international students the opportunity to get settled, become acclimated to their new home and get to know other students before freshman orientation begins, said Chrissy McCrary, International Student Advisor and Study Away Coordinator.

It also provides a valuable opportunity for students to learn about campus resources, Georgiev said. Furman faculty and administrators take time to visit with students at Asbury Hills and discuss everything from academic regulations to time management and study skills.

Though she’d heard much about Furman from friends, Melina Churt ’19 of Krefeld, Germany, said she was feeling very apprehensive about the start of classes.

The mock classes were a big help for Churt. “It took away a lot of the fear,” she said. “I don’t think I’ll feel nearly as afraid on the first day.”

“The mock philosophy class with Professor (Aaron) Simmons was amazing,” said Nani Sutidze ’19 of Tbilisi, Georgia. “It was so interactive. The professors were so open to questions.”

With Internet connections only available in the camp dining hall, Al Ameri said he was grateful for the lack of available technology in the shared cabins. “It forces you to speak with people and get to know them,” he said.

The close-knit feel of campus was the main reason Al Ameri said he chose Furman. “I like small communities where you can learn more and do more,” he said.

He said he’s already talked with Volunteer Services Coordinator Nancy Cooper about arranging visits with senior citizens at the Woodlands to teach them the basics of Skype and Whatsapp to stay in touch with their children and grandchildren.

“I learn from them too and they’re a great resource for life,” Al Ameri said.

Will Booker ’16, a church music major, said he was happy to give up two weeks of his summer to come back to campus early and serve as a resource for new international students.

As an orientation assistant, Booker was there to welcome them when they arrived at the Greenville-Spartanburg International Airport and drove them to campus for the first time. He answered their questions on all sorts of topics, ranging from which company offers the best cell phone service to how to go about setting up a bank account.

When it came time for one of orientation’s key events, the student talent show, Booker was one of the first ones to jump up and sing for the group.

“Furman is all about connections with other people,” said Booker, who performed a song in German. “It rejuvenated my life to see how excited they were.”

Learn more about the Rinker Center for Study Away and International Education.