John Kiser ’14 was sitting at his desk in his Atlanta office when he got a long-distance phone call from Tacoma, Wash.

The caller said she knew the whereabouts of a 55-year-old man, Robert Reese, who’d been featured on the Justice Network as a “most wanted” person by U.S. Marshals. It was just the tip law enforcement officials needed.

After 13 years on the run, Reese was arrested in May.

For Kiser, his job as a production assistant at the Justice Network is the perfect way to blend his love of video production and community service.

The Justice Network, a new multicast network launched in January, offers round-the-clock true crime and investigation programming with host John Walsh of America’s Most Wanted fame. The network works in partnership with Crime Stoppers USA, The National Center for Missing and Exploited Children, the U.S. Marshals, and other law enforcement agencies.

Available in major cities nationwide, Justice Network dedicates 90 seconds of every hour of every day to public service announcements, including notifications of missing children and most wanted fugitives and safety tips for viewers. 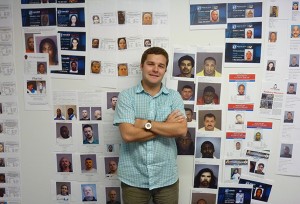 Developing public service announcements is a major part of Kiser’s responsibilities at the network, where he edits and digitizes shows for production, assists in scheduling shows, and helps with video shoots with Walsh and other talent.

Kiser, a psychology major as an undergraduate student, credits Furman with helping him find his love of video production.

With the help of the Internships Office at Furman, Kiser connected with Furman alum Chad Bennett ’03 for a virtual internship during his senior year with Populus Brands, an innovative brand-building company founded by Bennett that drives franchise growth, incremental revenue, and consumer engagement.

Kiser managed social media accounts for the Trone Student Center while working as a student manager his senior year. He also worked part-time as a student videographer for Furman’s Office of Marketing and Public Relations under the supervision of Communications Director John Roberts, who is also coach of the Furman Men’s Rugby team.

It was then that he learned more about the importance of teamwork. “Coach Roberts was always telling me to think about the work I was doing and asking me, ‘how can you tell this story?’” Kiser said.

As his thoughts turned toward graduation, he began to think about career options and met Ned Simon, the father of his friend, Cameron Simon ’14, and the head of production and operations at the Justice Network.

Simon, who has been in the network television business since 1978, gave Kiser feedback on some videos he’d edited and told him to stay in touch.

“One thing many young people do today is fail to follow up or stay in touch. That is a big mistake in my book,” Simon said. “Throughout his senior year at Furman, John continued to send me videos he’d shot and edited. I gave him some assignments to see how he would do and he followed through on all of them.”

Kiser came on board as a contract employee two weeks after graduation and within the year, was hired as a full-time employee.

“John is a smart young man, resourceful and hard-working. He has a lot thrown at him each day and handles it well,” said Simon. “He wears many hats and does it willingly. Not all college graduates come to the table willing to do what it takes to get the job done. John Kiser does.”

“I still can’t believe I get paid to do what I love,” said Kiser. “When you do what you’re passionate about, it doesn’t feel like work.”

He also credits Furman for helping him develop problem-solving and time management skills that help him every day in the work place. Even with long days, Kiser said he’s thankful that he’s been able to balance the tasks at-hand and find creative solutions for challenges he’s been given.

“A liberal arts education can arm you to do anything after graduation,” he said.

Learn more about internships at Furman.