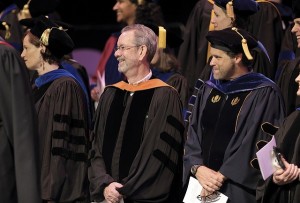 Furman University will celebrate the beginning of the 2015-16 school year with its fall convocation Thursday, Sept. 3 at 10 a.m. in McAlister Auditorium.

Furman president Elizabeth Davis will preside as the university welcomes the freshman class and presents a number of major honors and awards.

The public is invited to attend.

The convocation address, “Aspects of Transformation,” will be delivered by Dr. Scott Henderson, the William R. Kenan, Jr., Professor of Education at Furman.

Robert H. Buckman, who has served numerous terms on Furman’s Board of Trustees, will be awarded an Honorary Doctor of Humanities degree during the ceremony.  He is the former chairman of the board and chief executive officer of Bulab Holdings, Inc., the holding company of Buckman Laboratories.

The Rev. James Russell Dean II, a 1986 Furman graduate, will receive the Richard Furman Baptist Heritage Award.  He is co-pastor of Park Road Baptist Church in Charlotte with his wife, Amy.

The university will also recognize five members of the senior class who have been named Furman Fellows for the current academic year. They are Jordan Brown of Gastonia, N.C., Jennifer Duer of Sarasota, Fla., Samuel Hill of Richmond, Va., Jonathan Kubakundimana of Rwanda, and Kristen Marakoff of Fort Mill.