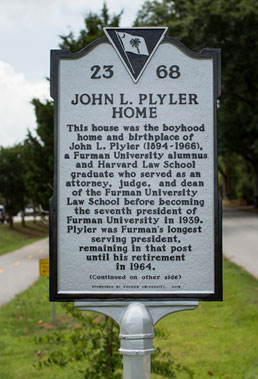 The house is located at 302 N. Main Street in Travelers Rest, and the marker is located across the street on the Swamp Rabbit Trail. The ceremony for the historical marker took place July 18 in a ceremony at the Travelers Rest Sargent Branch Library.

Plyler graduated from Furman in 1913 with a Bachelor of Arts degree.  He received a LL.B. from Harvard Law School in 1921 and a LL.D. from Erskine College in 1939.  Before going to law school, he served as a second lieutenant in the U.S. Army during World War I.  He was also awarded honorary Doctorate of Letters degrees from Wofford College and Furman.

Plyler taught in Furman’s new Law School beginning in 1922, eventually becoming Dean of the Law School until it closed in 1932.  He was also an Instructor in Economics at Furman, and served on the Board of Trustees.  He became Furman’s president in 1939 and oversaw the university’s move to its current campus.  He died in April of 1966 at the age of 72.