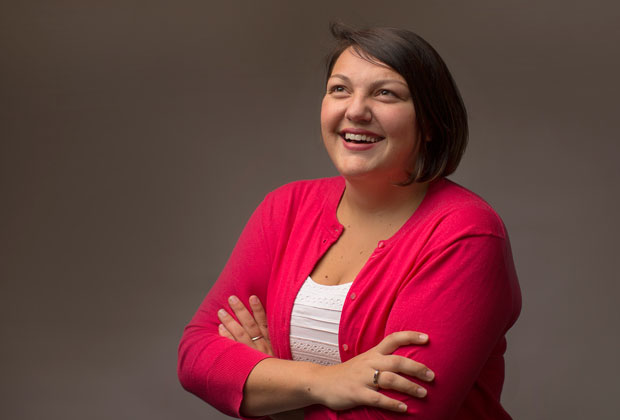 Just a few days after graduating with her elementary education degree from Furman, Madison Smith ’15 has happily taken the plunge into the world of adulthood.

She’s rented her first house near downtown Greenville and purchased two white rocking chairs that she assembled herself to use for daily al fresco dinners on the front porch.

The location couldn’t be better. Smith passes one of her favorite buildings on her commute to work and to Furman for graduate classes. It’s a surprising choice, a modest looking building with train-shaped playground equipment in the front.

“Every day, I get to drive past my dream,” said Smith.

It only took two weeks at the Meyer Center for Special Children for Smith to figure out what she wanted to do with the rest of her life: teach. She’ll begin teaching in a third-grade classroom of her own this fall at Oakland Elementary School in Spartanburg School District 2.

“I didn’t find teaching,” she said. “Teaching found me.”

A few years ago, Smith would have written her story a little differently. She had visited Furman briefly on a college road trip with her dad, Bill, but her plan was to attend Emory University.

At the last minute, she just had a feeling that something wasn’t right and she made a last minute decision to switch to Furman cold turkey.

Smith still isn’t sure exactly why, but thinks it may have been “divine intervention.”

From there, everything fell into place.

In her first semester as a freshman, Smith took Education Professor Judy Stuart’s Human Growth and Development course and was assigned to complete fieldwork in a preschool classroom at the Meyer Center. It was a perfect match.

She scrapped her plans to major in neuroscience and became an elementary education major instead.

During her sophomore year, she worked with Stuart to research iPad apps and how they can be used to help students with disabilities. She and other Furman education majors presented their research at the Council for Exceptional Children National Conference in San Antonio, Texas.

Smith has since adopted Stuart as one of her two Furman moms.

“Madison Smith is one of the most multifaceted students I’ve met. Since meeting her as a freshman, I’ve seen her grow into a mature young woman with layers of talent,” said Stuart. “Her passion for working with children, particularly children with disabilities, is what underlies her motivation to learn and to succeed. Her thirst for knowledge is seemingly insatiable and her enthusiasm is infectious. She will be an incredible role model for the many students she will teach.”

Smith’s second mom, Nancy Cooper, Furman’s coordinator of volunteer services, has seen Smith walk through and create even more doors of opportunity for students during her time at the university.

Smith started out as a volunteer with Heller Service Corps and became the coordinator for Camp Spearhead, a program for youth and adults with special needs and disabilities in Marietta, S.C. She went on to serve as division head of special needs and was named the director of volunteer relations during her senior year.

One of Smith’s latest contributions to Furman is the Lunch Buddies program at Heritage Elementary School, which pairs Furman students and kindergarteners through fifth graders who are struggling either at home or at school. This year, 10 Furman students volunteered as mentors, which meant eating lunch and chatting with their new friends each week.

Cooper describes Smith as a “connector and reflector.” With her extensive network of friends from freshmen to seniors, Smith is gifted at connecting people to Furman programs that will interest them, said Cooper.

She’s also a reflector in that she always downplays her role in a project and puts the spotlight on others, said Cooper. “She always puts someone else first. She lives and breathes to make the world a better place.”

For Smith, her senior year was her most challenging as she tried to balance campus commitments, teaching full-time in a classroom, and completing assignments as a Furman student.

Still, she felt very prepared for her teaching career. “I feel like I know my stuff. I’m equipped to use new technology,” she said. “If I need help, all the professors in the Education Department have their doors open to me.”

Smith completed her teaching practicum in a second grade classroom at Holly Springs-Motlow Elementary School in Spartanburg School District One.

One of her most successful units was a poetry lesson centered around Sharon Creech’s book, Love That Dog, which tells the story of Jack and his beloved dog, Sky. Students used oil pastels and watercolors to tell stories of their own, which Smith turned into a three-dimensional bulletin board in the hallway.

“They completely blew me out of the water,” she said. “They were so proud of themselves.”

Now that graduation is over and summer is here, Smith isn’t slowing down. She was selected as the recipient of the Waco F. Childers, Jr. and Elaine Duffy Childers Special Education Scholarship for teacher candidates who demonstrate a desire to teach students with special needs and will begin graduate classes at Furman this month (June 9).

A fan of cooking, baking, and crafting, Smith said she’s already planning how she’ll fix up her classroom to harmonize with Oakland’s pirate theme. She already has pirate-themed books from Furman alumna Melinda Long ’82, such as How I Became a Pirate. She’s also contemplating a handmade burlap door sign that reads “S.S. Smith.”

One of her next projects: picking out a book to read on the first day of school. “I can’t wait,” she said.

Smith, a native of Isle of Palms, S.C., is the daughter of Bill Smith and Kathryn Martin. She has three siblings, Ford, Johnson, and Grace.