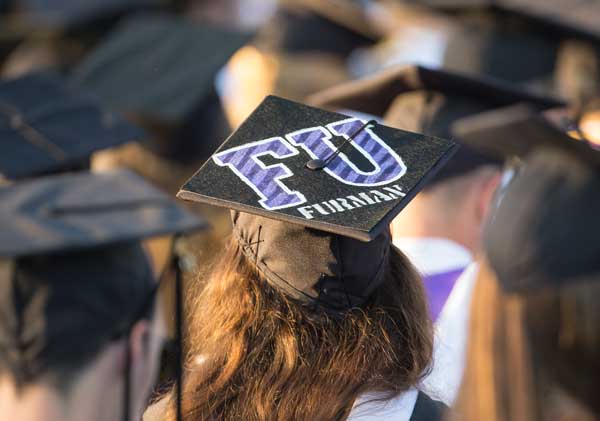 Furman offers more than 40 majors, which may sound like a lot—especially if your graduation year begins with a 19. But in an ever-more-complex world, they barely scratch the surface of possible futures for a college freshman in 2015.

There are nearly 1,500 academic programs available to undergraduates, and while places like the University of Michigan and Arizona State University have gone on the offensive by rolling out more than 250 areas of study that isn’t an option for a small, liberal arts school. Being a nimble problem-solver is, however, and Furman’s Individualized Curriculum Program (ICP) is a quintessential liberal arts solution.

ICP allows students to design their own major if their educational goals “cannot be met by existing majors or interdisciplinary minors.” Such was the dilemma faced by Hope Ogunsile ’16 when she realized Furman’s film studies minor wasn’t going to cut it.

“I knew I wanted to go into film before I came to Furman,” the Mauldin, S.C., native said. “I figured I would study business and take that where it would go, but I didn’t like it. It wasn’t enough. So I ended up just making my own major.”

Ogunsile’s “end-all, be-all, biggest dream” is to be a film producer, but to do that she needs to be educated in all aspects of film making—from writing to directing to acting—as well as all aspects of film marketing. So Ogunsile created something now called film and media studies, which features a curriculum that sees her “taking courses in every department except the science building.”

Other current ICP majors include sustainable development and social change; marketing design; health journalism; philosophy, politics, and economics; and global health. Alice Williams ’15 says the work required to create her global health major—which included coming up with a complete list of required courses and electives, writing a comprehensive essay explaining the need for her major, meeting with the head of every department involved, and presenting her case to the ICP committee—was daunting but worth it.

“The ICP major gave me the freedom to pick and choose classes that were specifically relevant to what I wanted to do and also gave me the flexibility to study abroad and also major in Asian Studies,” she said. “I could have taken the same classes when I was just an Asian Studies major, but having the global health degree shows specifically to employers and grad schools what I’m interested in. I think it is an under-utilized program, partially because it’s not that well known and partially because it’s a lot of work. It was like having an extra class the semester I was working on it.”

Renee Chosed, Ph.D., a biology professor, served as the ICP committee chair in 2014-15. Also Williams’s advisor, Chosed says the program is a great option for students to have, though many discover it’s not an easy path to go down.

“When freshmen come here they are just super excited they could create their own major and do whatever they want, and then they learn a little more about the process and realize it’s not for everyone,” she said. “It’s for super high-achieving students . . . There are lots of students who start the process and don’t finish the process.”

According to Marianne Pierce, Ph.D., Furman’s senior associate academic dean, ICP has been in existence since at least the early 1970s. Students can’t declare an ICP major until after their freshman year, and fields of study are not limitless—only classes in which Furman has accredited instructors can be offered, which eliminates things like architecture.

“That’s what a liberal arts education is all about,” she said. “You’re not being trained in a narrow discipline. Your major doesn’t determine your career. It doesn’t limit your career, and we don’t want the ICP to be a limiting career-focused thing either.”

ICP has helped Furman serve its students better, however. Because of multiple ICPs, the school created communications and neuroscience majors and may soon add global health, according to Chosed.

“The ICP program in general embodies liberal arts and engaged learning,” Williams, who recently accepted an invitation to join the Peace Corps after graduation, said. “I’ve had the luxury of a Furman education. Hopefully the ICP program will help me find a way to give back.

A conversation with her freshman advisor alerted Ogunsile to ICP, and she got almost everything she wanted. Almost.

“The only problem I think they had at the end of the discussion was they didn’t like the name, because I wanted to go with film and business. But obviously it’s film and media studies,” she said. “And I don’t mind.”