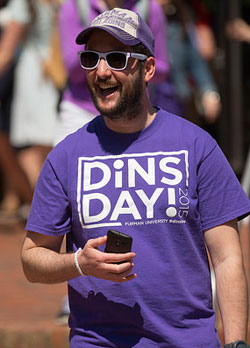 Furman University officials had high hopes for its first “Dins Day” celebration, a 24-hour fundraising event that took place on April 28, but the results exceeded even the most optimistic expectations.

The final tallies show that “Dins Day” raised more than $1 million ($1,010,450) in gifts and pledges from about 1,500 donor households.  Just as importantly, interest in the event wasn’t confined to the campus as social media carried the celebration to the Paladin faithful across the country and the world.

“The campaign was wildly successful, especially considering Furman’s size, and the fact that this was our first attempt at such a drive,” said Justin Rourk ’14, Associate Director of Donor Marketing.  “Very few universities are able to raise more than a million on their first try.”

Named for the university’s mascot, the Paladins, Dins Day was held in conjunction with the last day of classes at Furman, and was a day set aside to celebrate all things Furman. For the event, members of the Furman community wore purple, broadcast their Paladin Pride through social media (using #DinsDay) and raised money to support the university’s future students.

Rourk credits the success of Dins Day to an engaging social media component which fueled worldwide interest among the Paladin faithful. On Twitter and Facebook alone, the campaign reached more than a million people. 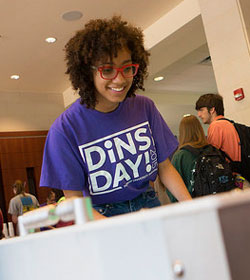 “It’s impressive that our alumni, parents, students, friends, faculty and staff provided as much support as they did,” Rourk said, adding that the number of individuals directly solicited amounted to less than 30,000. “So to raise more than a million dollars with that base is pretty remarkable and definitely an outlier when you look at ‘give days’ at other schools across the nation.”

Adding more enthusiasm and a sense of urgency to the campaign were the number and size of monetary challenges tendered by university trustees and other members of the Furman family, not to mention the volume of smaller gifts from the broader Furman community. “We saw a good mix of large and smaller donations,” said Rourk.

Another factor for success was pairing Dins Day with the last day of classes at Furman, which spurred everyone to get involved. “It was a great way to energize the Furman base and to share a classic on-campus celebration with the larger Furman contingent around the world,” Rourk said.

Rourk said the Furman faithful who missed Dins Day this year shouldn’t worry.  The university will hold the event again in 2016 on the last day of classes.