Skip to main content
May 12, 2015 by Tina Underwood, Contributor 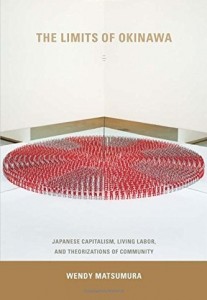 The Limits of Okinawa: Japanese Capitalism, Living Labor, and Theorizations of Community is published by Duke University Press, which offers this description:

“Since its incorporation into the Japanese nation-state in 1879, Okinawa has been seen by both Okinawans and Japanese as an exotic “South,” both spatially and temporally distinct from modern Japan. In The Limits of Okinawa, Wendy Matsumura traces the emergence of this sense of Okinawan difference, showing how local and mainland capitalists, intellectuals, and politicians attempted to resolve clashes with labor by appealing to the idea of a unified Okinawan community. Their numerous confrontations with small producers and cultivators who refused to be exploited for the sake of this ideal produced and reproduced “Okinawa” as an organic, transhistorical entity. Informed by recent Marxist attempts to expand the understanding of the capitalist mode of production to include the production of subjectivity, Matsumura provides a new understanding of Okinawa’s place in Japanese and world history, and establishes a new locus for considering the relationships between empire, capital, nation, and identity.”

Joining the Furman faculty in 2009, Dr. Matsumura holds a Ph.D. from New York University. She specializes in Japanese history and post-World War I Asian agrarian society.