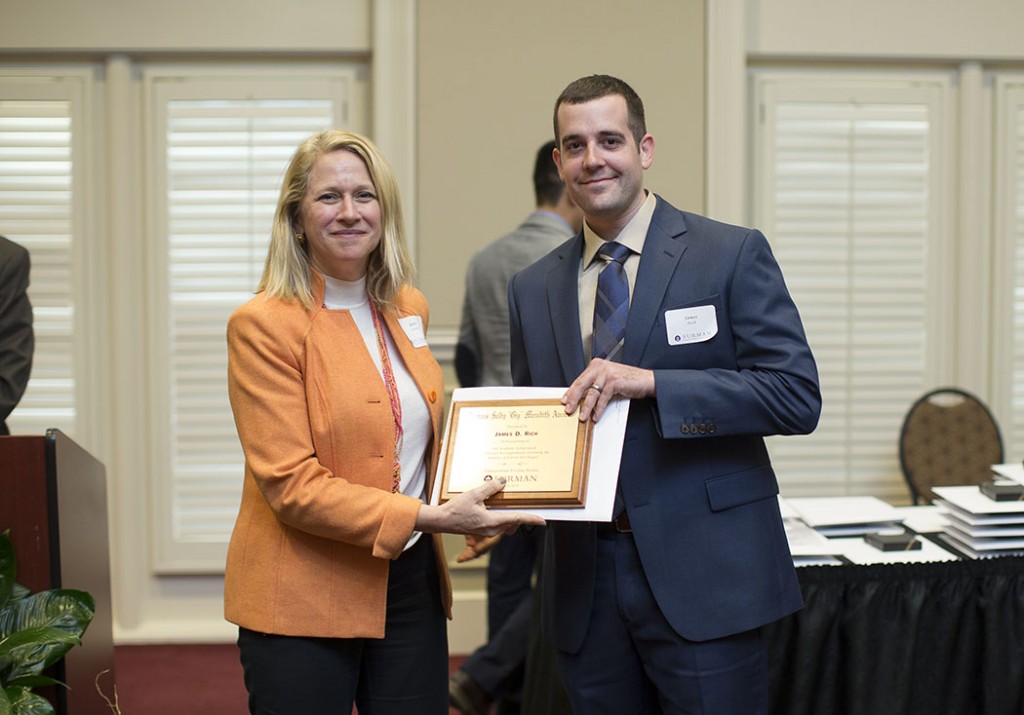 James Rich, who moved to the Upstate to attend Furman University’s Evening Undergraduate Program, was recently named the Francis “Gig” Meredith Student of the Year.

After growing up in Valdosta, Ga., Rich attended Valdosta State University for two semesters and then joined the U.S. Air Force.

“I wanted some excitement,” he said, joining a para rescue unit in 2007. Serious stress fractures during his training ended that plan so he moved into an engineering and surveying program. After technical school at Fort Leonard Wood in Missouri, “I got my orders. I thought it was Arkansas. It was Alaska.”

He married his high school sweetheart and they moved to Fairbanks in the winter. His wife attended college there while he worked in the drafting and surveying shop.

The window for doing outside surveying was about two and a half to three months each year, he said.

“The cold was very challenging. When we went out our instruments often didn’t work,” he said, recalling temperatures as low as minus 40 degrees. But “the summers were really beautiful.”

Rich said he enjoyed active duty, but the couple’s plans had always been for a short stint in the military and then for him to attend college.

While looking for a permanent location, they decided they wanted to be near his family in Georgia and his wife’s family in North Carolina.

He had never been to Greenville, but he found Furman’s Undergraduate Evening program was just what he was looking for.

“I always thought I wanted an outside job,” he said, but during his military tours “I was happiest inside crunching the numbers.”  That led him to a major in accounting.

They arrived in the Upstate and quickly found a home.  Without knowing the area, the location they chose wasn’t great—45 minutes from Furman and an hour from Travelers Rest, where his wife worked.

“I basically was going into it as a full-time student,” he said, adding that he cared for his children during the day while his wife worked to support the family. A week of each month, he went to Goldsboro, N.C., where he worked in the 567th Red Horse Squadron in the U.S. Air Force Reserves. He’s been tagged for deployment three times but hasn’t been on a long-term deployment since leaving the active military.

The faculty and staff worked with him to accommodate his military schedule, he said. “Often times I would have a few weeks a semester that I had to be gone for and they were always willing to help me get ahead or make up assignments in a timely manner when I returned.”

And Rich will continue that strong representation as he looks for a job:  “He can sell himself because he brings a lot of skills to the table,” with what he learned in the military and from Furman, Copsey said.

“I think the UES students are much more prepared to study” than traditional college students, he said. “They’re more focused, more driven. It’s more of a job for them. They understand the reasons behind what they’re learning.”

The award, which includes a small monetary sum, was begun in 1999 when funds were donated  for the award. Furman’s evening program has about 100 students, with more than 69 percent remaining in the Greater Greenville area and more than 80 percent remaining in South Carolina, said Beth Crews, program director.

Faculty members recommend students for the award. Crews, who is academic advisor for all the students, reviews the nominations looking for a student who will well represent Furman as well adult students and their interests.

Rich  was selected because of the way he was able to balance his school work, family life, and out-of-state military responsibilities, she said.

Although Rich planned to walk in the May graduation, he will be unable to be there because of his military responsibilities. He will be spending two to two and a half weeks  in  Central America building schools with the rest of his squadron.