Skip to main content
May 4, 2015 by Tina Underwood, Contributor 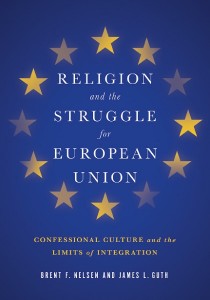 Religion and the Struggle for European Union: Confessional Culture and the Limits of Integration is published by Georgetown University Press, which offers this description:

“In Religion and the Struggle for European Union, Brent F. Nelsen and James L. Guth delve into the powerful role of religion in shaping European attitudes on politics, political integration, and the national and continental identities of its leaders and citizens. Catholicism for centuries promoted the universality of the Church and the essential unity of Christendom. Protestantism, by contrast, esteemed particularity and feared Catholic dominance. Nelsen and Guth compare the Catholic view of Europe as a single cultural entity best governed as a unified polity against traditional Protestant estrangement from continental culture and its preference for pragmatic cooperation over the sacrifice of sovereignty. As the authors show, this deep cultural divide, rooted in the struggles of the Reformation, resists the ongoing secularization of the continent. Unless addressed, it threatens decades of hard-won gains in security and prosperity.”

Says University of Nevada, Las Vegas political science professor Ted Jelen, Ph.D., “This is a superlative book. Nelsen and Guth have taken a novel, imaginative approach to the prospects for the European Union, which is among the most important global issues of the 21st century. Nelsen and Guth combine broad historical and theoretical perspectives with nuanced and insightful data analyses.”

A Furman faculty member since 1990, Dr. Nelson is coeditor of The European Union: Readings on the Theory and Practice of Integration and editor of Norway and the European Community.

Joining the Furman faculty in 1973, Dr. Guth is a William Rand Kenan, Jr. Professor of Political Science. He is the coeditor of The Oxford Handbook of Religion and American Politics with Corwin E. Smidt and Lyman A. Kellstedt.