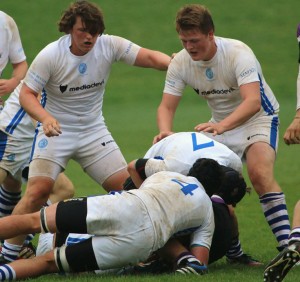 Robbie Greco, a senior at Uppingham School in England who has played rugby for 11 years, has accepted a Furman rugby scholarship and will be a Paladin this fall.

Greco, 6’1, 215, is a prop and played on Uppingham’s First XV this fall. He joins Matty Newman, a rising sophomore, as the second English player to join the Paladins in as many years.

“Robbie worked hard to develop his positional skills knowledge and game understanding, and he was a competent and courageous rugby player. Robbie had a good work ethic and was very coachable,” said Uppington rugby coach Paul Westgate. “He understood his role in attack and defense, and one of his strengths was his ball-carrying ability. Robbie was also a good support player and a good team man.”

Greco, the son of David and Katherine Greco who reside in Hong Kong, began the sport in 2004 as a student at Chinthurst School.

“I have chosen to attend Furman because of its close-knit community and excellent faculty. The rugby team is outstanding and with John Roberts as our coach, coupled with a talented team it’s exciting to think that a national championship is within reach,” said Greco. “I can’t wait to start in August.”

Coach Roberts said Greco could contribute early as both of Furman’s starting props (sophomores Jeff Tongue and Adrian Marcogliese) are expected to be away next fall participating in study away.

“Robbie had a chance to run with our team recently,” said Roberts. “He runs well with the ball and is athletic. His rugby knowledge is exceptional. We are looking forward to seeing him in action.”