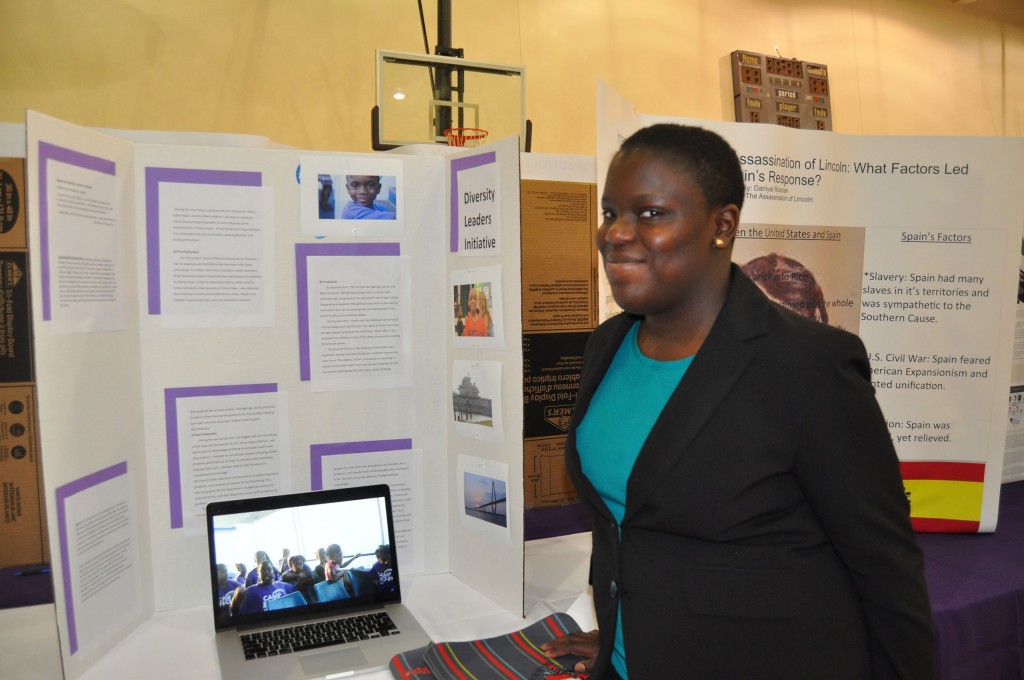 Hope Ogunsile, a Furman University junior majoring in film and business, parlayed her skills into an internship last summer with the Riley institute at Furman, the Charleston YMCA, and Camp Hope.

She presented a poster and video—the result of her internship—during FurmanEngaged! The video also is posted on YouTube and is being used by Mozaik, a team of the Riley Institute’s Diversity Leaders Initiative that created Camp Hope in Charleston.

Leaders from all sectors of South Carolina, nominated by DLI alumni and invited to apply, take part in the Initiative, an interactive program where participants learn to understand and celebrate their diversity and try to find their “blind spots” and suspend assumptions about others. They create projects in their home communities and come away with focused decision-making skills and deep knowledge of how to effectively manage and lead increasingly diverse workers, clients, and constituents.

The Camp Hope video, running a little more than five minutes, “was my first hands-on project without someone behind me,” said Ogunsile, a Greenville native. “It was interesting. I definitely learned how to make a documentary-type film.

“One day I hope to be an analytical producer, which doesn’t now exist,” she said of her career goal. She said that job would be analyzing video, figuring how out to best use it, and teaching businesses how to use film in their marketing.

Basically, she said, that’s what her video of Camp Hope does. The evening camp in Charleston is designed for low-income, high-risk children aged about 6 to 13. They have interactions with police officers, learning how police can help them and the trouble they can find themselves in with gangs. The youngsters learn various skills, take boat rides on Charleston Harbor to learn about the history of the harbor and the city, and attend baseball games.

“They find shelter at Camp Hope,” she said. “The children learned that there are police officers who will take care of them.”

Many, she said, “had never been on a boat or even swimming.” Camp Hope gives them opportunities to see a different life and realize they can do something different from what they see in their neighborhoods.

Ogunsile also learned much during her internship. She became more proficient in pre-production, production, and post-production, she said, learning how to develop questions, interview kids, keep them on target and help them speak in complete sentences to say what they wanted to express. She also learned to blend into the background and how to edit out good material that didn’t match the video’s goal.