The grant is valued at $3,000 annually over three years and is designed to support faculty in their ongoing quest to remain leaders in their fields.

The Furman Standard is a program whereby donors may honor one or more faculty members by pledging $25,000 (payable over five years) or by establishing a $100,000 planned gift. Contributions to The Furman Standard are pooled to assist professors in procuring the materials, training, development and other needs associated with their research endeavors.

Since its inception in 2010, The Furman Standard program has garnered nearly $2.4 million toward the goal of $3 million. To date, 39 current and former faculty members have been honored by 29 donors.

Blackwell is receiving the research grant for his project titled “Shoots and Leaves: A Canonical Graph Services Protocol.”  The goal of this project is to create a generic protocol for canonical citation of graphed data. 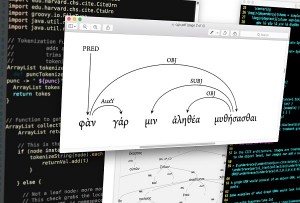 Says Blackwell, “A Furman Standard grant, in addition to being a very great honor, will help me spend three years having conversations with scholars in the United States and Europe who work with complex relationships and who care about methods for citation. Scholarship is the business, first, of knowing what you are talking about and, second, being able to say what you are talking about, precisely. This is harder than it sounds when you are talking about complex relationships among words or living things. It’s even harder when your goal is to be clear enough and precise enough for a literal-minded computer to understand.”

Blackwell, who holds a bachelors from Marlboro College (Vt.) and a doctorate from Duke University, says, “The grant will also allow me to do what I enjoy doing most—finding real problems of language and literature that have waited until the 21st century to be solved, and working with Furman students to find ways to solve them.”