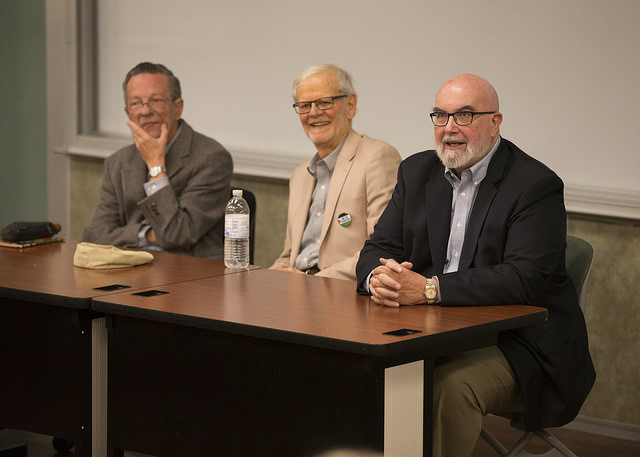 Two Furman University alumni and a retired faculty member who were at the school during the time it was desegregated by Greenville native Joseph Vaughn told the story of that event and the years leading up to it during a panel discussion Thursday.

The panel discussion is part of Furman’s commemoration of the 50th anniversary of its desegregation. Numerous events have been held throughout this academic year, including the publishing of a booklet, “50 Years: Commemorating Desegregation at Furman.”

Brian Neumann, a Furman alum, moderated the panel made up of Dr. Robert Schaible, Furman student body president in 1964-1965; Dr. Jim Edwards, a Furman graduate who wrote for the Paladin while on campus; and Dr. Phil Hill, Furman professor of drama emeritus.

“This event was 10 years in the making,” Neumann said, citing some students and faculty who had called for desegregation as early as 1955. However, the events leading up to Vaughn’s enrollment began in January 1963.

Recalling the days leading up to desegregation, Edwards said he grew up in Woodruff, a small textile down that was deeply segregation.

“In some ways, my views were conventional views,” about race as well as other issues, he said. But “I had already realized that was a problem for me.”

Furman encouraged him to think differently, he said, and to realize how moral issues are fundamentally affected by the surrounding social attitudes. Furman “made it hard to be morally complacent.”

Schaible, who grew up in the Charleston area, said, “I came to Furman as a racist, not a vicious racist but a separate-but-equal racist. I don’t believe I can say I had a thought until I came to Furman.”

That experience of learning to think, he said, was troubling but exciting.

When the Paladin conducted an opinion poll of students in November 1963 on desegregation, he saw the poll and “I walked out of the building and realized, to my surprise, I was going to vote yes,” He became more convinced of the rightness of desegregation as time went on.

“I became convinced this was definitely a moral issue. At Furman, I was encouraged to do that kind of thinking,” he said.

The two alumni said they don’t remember much about conversations that arose about desegregation.

Even the student against the action thought their beliefs were natural. “It was just the way things were. It’s awfully hard for individuals, without guidance, to break from what is normal,” Schaible said.

Edwards reported on the decision by the South Carolina Baptist Convention to ask Furman to delay action on desegregation for a year. He heard Rev. L.P. Johnson, pastor of First Baptist Church in Greenville, appeal to the Convention to do the right thing.

His article began with an “inflammatory metaphor” where he said the Holy Bride of Christ, which was the Baptist church, had received “a Las Vegas-style divorce” through the vote, he said. He said he got in a little trouble with that language.

Schaible, who attended the second Convention where Furman was asked to again delay action, said he began a letter-writing campaign after the vote. Students were asked to write letters urging the Board of Trustees, who had earlier adopted a non-discriminatory policy of admissions, not to back down. More than 400 letters were written, which accounted for about a third of the student body.

Hill, who joined Furman’s faculty in the fall of 1964, said of the faculty at the time, “They were concerned. My sense of the faculty—I can’t recall a single faculty member that was against integration.

“The word got around that Dr. Bonner wanted faculty members, particularly new ones, to write to him that we came here expecting the school would integrate.”

About 20 percent of the faculty, including Hill, wrote those letters to Francis Bonner, dean of Furman and “I understand it helped.”

Schaible walked around with Vaughn the first week he was on campus. Bonner’s idea was that being with the student body president would defuse any possible trouble.

“I think both of us were a little nervous,” Schaible said of the week. But “I didn’t anticipate anything was going to happen” although some ugly events took place off campus.

Hill, who taught Vaughn in a speech class and directed him in a major play, said, “He was a good student, picked up on what was said and responded.” When he became interested in theater, he worked backstage as well as acted.

Directing Vaughn “was a rewarding experience for me and, I think, for him,” Hill said.

Schaible recalled that during the summer, a small group of rising high school seniors attended a camp at Furman, and he was a counselor. He took three or four of the young people, including a young black man, to a barber who cut the hair of Furman students.

“There was tension in the air,” he said. When it was time to cut the hair of the black man, one barber refused with ugly language and walked out of the shop. The owner, Mr. Carroll, said he would cut his hair as soon as he finished with the customer in his seat. He did so.

Schaible said he heard that the other assistant also resigned and the two went around to shop customers telling them that the shop was not cutting the hair of black people and urging a boycott. He heard the shop had to close and the owner died shortly after that of a heart attack.

“This was a decent man just doing want was right,” he said. “There’s an unsung hero of human decency.”

Read more about desegregation at Furman.