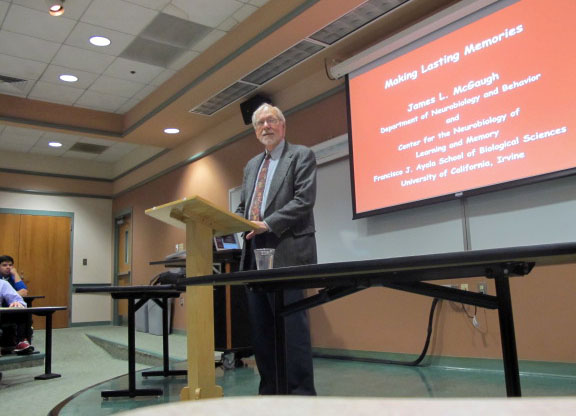 Dr. James L. McGaugh, a Research Professor of Neurobiology and Behavior in the School of Biological Sciences and Fellow at the Center for the Neurobiology of Learning and Memory at the University of California, Irvine, visited Furman University’s Psychology Department March 20 for a colloquium, “Making Lasting Memories.”

His visit was part of the university’s celebration of Brain Awareness Week, a global celebration launched by The Dana Alliance for Brain Initiatives to bring attention to brain science advances.

This lecture was sponsored by the Psychology Department, the Psychology Club and the Collaborative Neuroscience Society (CNS). Each year, the students organize a colloquium to bring a distinguished researcher to campus. The speaker is selected by the students and the event is completely organized by the students. This talk was also part of the McCahan Colloquium Series, named after a former Psychology faculty member, Dr. Gerda McCahan. The purpose of the series is to stimulate intellectual curiosity and excitement about advances in the science and profession of psychology.

The lecture focused on the idea that stress hormones such as epinephrine and cortisol are key to why people remember some things more vividly than others. Dr. McGaugh shared how his first studies failed but that failure led to other ideas which turned out to be groundbreaking in the field, said Associate Professor of Psychology Michelle Horhota. Students also had the opportunity to meet with Dr. McGaugh and speak with him in a small group setting.

He has published more than 500 articles and chapters on the link between emotion, stress hormones and memory.

McGaugh has also conducted research on Superior Autobiographical Memory which has been featured on “60 Minutes” and his recent article, “Brain Science: Remembrance of All Things Past,” was recently published in Scientific American.

2021 inductees to Iowa Business Hall of Fame are announced