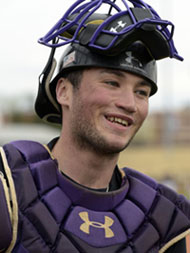 Three years had passed, and Jake Kinsley had forgotten all about participating in a bone marrow drive during his freshman year at Furman.  He had submitted his information to “Be The Match,” a national marrow donor program, to aid a relative of a Furman tennis coach. But he was not a match. His name, however, remained in the registry, even though he didn’t hear back from the donor program except for the occasional generic email. But that changed this winter when a peculiar number popped up on his cell phone. What happened next was featured in a front page story in The Greenville News.