He had only stopped for a cup of coffee.

But sitting alone in a booth at Mrs. Winner’s Chicken and Biscuits in Nashville was a young boy clutching a radio held together with three strips of silver duct tape.  The nine-year-old spent all his weekends at the restaurant, listening to ball games and waiting on his grandmother, who worked as the cashier.

Jim Bradford isn’t sure what impelled him to go talk to HK Derryberry, but their 30-minute conversation one Saturday back in 1999 has blossomed into fifteen years of friendship. 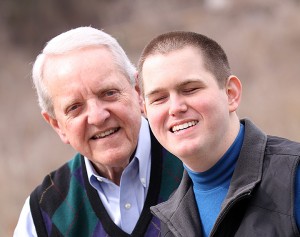 The unlikely pair shared their story with Furman students and faculty Friday as part of the Psychology Club’s celebration of Brain Awareness Week.

William “HK” Derryberry came into the world unexpectedly after a car accident on July 8, 1990, born blind and diagnosed with cerebral palsy and a host of other medical problems.

He also was born with an extraordinary gift known as hyperthymesia, also known as superior autobiographical memory. One of only about 50 people in the United States with the diagnosis, Derryberry has the ability to remember every event that has happened to him since he was 3 ½ years old.

Researchers at Vanderbilt University hope that studies on HK’s brain may one day lead to treatments for people suffering memory loss.

Derryberry can remember what the weather was like on a specific day a decade ago. He can tell strangers on which day of the week they were born. He can remember his blood pressure readings every time they’ve been taken. He knows a mind-boggling number of sports statistics, scores of football and basketball teams from years ago.

As a child, Derryberry’s grandmother was told he’d be confined to a wheelchair. While he isn’t able to play sports like he wants, Derryberry walks independently, has learned how to ride a horse and has even done some snow skiing.

Thanks to his friend and mentor, Jim Bradford, he was also able to enjoy more of his youth, sharing in many activities with Bradford’s family. “He let me borrow his eyes,” said Derryberry. “He would paint word pictures for me. He was proud of me.”

At one point, Derryberry was told he wouldn’t graduate high school. Again, the naysayers were wrong.

Derryberry enrolled in Tennessee School for the Blind at age three and was the first person at the school to learn how to read and write Braille with one arm. He earned his high school diploma in May 2013 at the age of 21, one of the first in his immediate family to do so.

“The only disability any of us have in life is a negative attitude,” Derryberry said. “Reach for greater accomplishments… in your lives.”

These days, Derryberry and Bradford travel together across the region, sharing their story as motivational speakers. As part of his visit to Furman, Derryberry was also made an honorary member of the Psychology Club.

2021 inductees to Iowa Business Hall of Fame are announced