Part of a series celebrating 10 years since the installation of the university’s C.B. Fisk pipe organ, the recital will be presented by University Organist and Professor of Organ Charles Tompkins, D.M.A., and his son, violinist Gregory Tompkins. Tickets are $12 for adults, $10 for seniors and $5 for students.

Music to be performed includes works for solo organ by J.S. Bach and César Franck; the first movement of Eugene Ysaÿe’s Sonata No. 4 for solo violin; and works for violin and organ by contemporary composers Jean Langlais and Carl Rütti.

The recital also features the premiere performance of 1963 Furman alumnus Graham Farrell’s “A Gospel Pair: Two Duets for Violin and Organ based on Hymns of William Bradbury,” commissioned by the Furman Department of Music for the 2014-15 10th anniversary celebration of the university’s C.B. Fisk organ, Opus 121.

Professor of Music and University Organist Charles Tompkins has been a member of the Furman faculty since 1986.  He also serves as organist of First Baptist Church in Greenville. A nationally-acclaimed organ recitalist and teacher, Tompkins received his doctorate in organ performance from the Eastman School of Music, and was awarded Eastman’s Performer’s Certificate in recognition of outstanding performing accomplishment. He holds the bachelor of music in organ performance from Eastman and the master of music from the University of Michigan.

Tompkins is an active recitalist and clinician performing each year at major universities and churches throughout the United States. He has presented recitals at the Kennedy Center, Washington, D.C., the Piccolo Spoleto Music Festival, Charleston, S.C., and at national and regional conventions of the American Guild of Organists, the Music Teachers National Association, the College Music Society, and the Association of Anglican Musicians. In 2011 he performed a series of programs in France and Switzerland, including a recital at the Cathedral of  Notre Dame, Paris. He has been a featured artist at AGO regional conventions in Nashville (1995), Fort Wayne (2001), Charleston, S.C. (2003), and Columbia, S.C. (2013). Tompkins’ performances have been broadcast nationally on American Public Media’s “Pipedreams,” and his debut CD, Solemnity and Joy, was released in 2001 on the Pro Organo label. 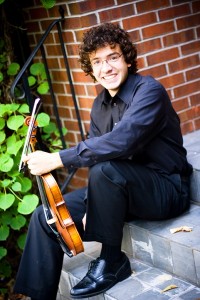 Violinist Gregory Tompkins, a native of Greenville, is the second violinist of the Haven String Quartet, part of the Music Haven Organization in New Haven, Conn. He is a recent graduate of New England Conservatory where he studied with Jennifer Frautschi and Lucy Chapman, and also holds a bachelor of music in violin performance from the Eastman School of Music where he was a member of the class of Charles Castleman.

An active recitalist, Gregory Tompkins has performed in a variety of venues in the eastern United States, such as the Young Artists’ series at the Niagara-on-the-Lake International Chamber Festival and Harvard Memorial Church in Cambridge, Mass. He has attended summer festivals at Music Academy of the West (Santa Barbara, Calif.), Spoleto USA (Charleston, S.C.), and National Repertory Orchestra (Breckenridge, Colo.). Gregory Tompkins performs on a violin by Tschu Ho Lee graciously on loan to him from the Virtu Foundation.

For tickets or information about the recital, contact the Furman University Music Department at (864) 294-2086, or email the department at FurmanMusic@furman.edu. Tickets may also be ordered online.

Fourteen Furman students from diverse backgrounds and majors graduate in the class of 2020.