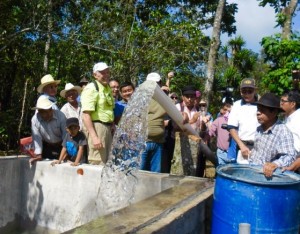 For Water Walk 2015, more than 700 Furman students, faculty, staff and local residents will carry water around Furman Lake from 1-5 p.m. Saturday, March 28 as part of an effort to raise $100,000 to construct a potable drinking water system in two rural communities in Guatemala.

The public is invited to attend and participate in Water Walk 2015. Students will accept tax-deductible donations and $5 sponsorships to support the effort.

For the Water Walk, participants are asked to carry gallons of water in buckets and containers of various sizes to simulate the mile-long-trek that billions of people in the developing world take each day to locate drinkable water.

Guatemalan resident Francisco Juarez will also be participating in Furman’s Water Walk and will share his village’s story during a special presentation at noon, Saturday, March 28 in the Watkins Room of Trone Student Center on campus. The program is part of the university’s Cultural Life Program and a week-long celebration of Earth Week.

Rotary District 5150 representative Jon Kaufman, who recently led an effort to bring potable water to rural Guatemala, will open the Water Walk with a ribbon-cutting.

“This event is particularly important because it helps emphasize Furman’s corporate social responsibility and environmental sustainability efforts,” said Furman junior Remi Bagwell, who is organizing the event with Global Sustainability Club co-president Jose Bailey. “The Water Walk is a great opportunity to get outside, spend time with friends and have an impact abroad.”

Furman business professor Bruce Clemens, Ph.D., first began working as a volunteer in Guatemala 40 years ago, where he and a group of supporters formed a non-profit consulting firm, Agua del Pueblo. Since its beginning in the 1970s, the organization has completed more than 700 potable water projects, bringing water to more than 20 percent of Guatemala’s rural population.

Their latest effort has brought Clemens and groups of Furman students to Sanik-Ya and Chitulul, small Mayan villages on the outskirts of the municipality of San Lucas Tolimán in the State of Sololá, Guatemala. Women in such villages walk several miles and spend up to four hours daily collecting drinking water for their families.

Work on the main water pipeline has already begun, thanks to more than $40,000 in donations already made by The Duke Endowment, Furman students, alums, local residents and friends.

Jim Zenner of Rotary District 5170 is leading the effort for a proposal to Rotary International to finish the Sanik-Ya and Chitulul project. Furman students and faculty have also pledged to participate in a five-day walk around Lake Atitlán in Guatemala this year to raise additional money for the villages.