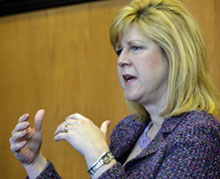 As Elizabeth Davis prepares for her formal inauguration on March 19 as Furman’s 12th president, she said the university is poised to increase its impact in Greenville while it works to more clearly define its role in higher education at a time when the value and costs of college, particularly private liberal arts education, have come under scrutiny. President Davis laid the groundwork for initiatives she hopes will characterize her tenure in a wide-ranging interview that appeared on the front page of The Greenville News.