Furman alumnus Brandon Tensley ’12 is one of 18 young adults from across the nation selected as a 2015-2016 Henry Luce Scholar. 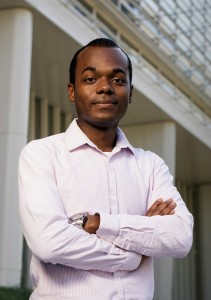 The Luce Scholars Program is a prestigious fellowship program launched by the Henry Luce Foundation in 1974 to enhance the understanding of Asia among potential leaders in American society by providing immersive living and working experiences in one of 15 Asian countries or regions. The program provides stipends, two months of intensive language training and individualized professional placements for an elite group of recent college graduates, graduate students and young professionals from a variety of fields who have had limited exposure to Asia.

“Being designated as a Luce Scholar is an enormous honor,” said Dr. Scott Henderson, Furman’s Director of National and International Scholarships. “Brandon is one of those rare individuals who combines an extraordinary intellect with a passionate commitment to social justice.”

“For my First Year Seminar at Furman, I took the Politics of Good and Evil with Dr. Liz Smith. It was an incredibly enriching class—it’s what first pushed me to grapple with the huge concepts of memory and justice, including in the context of the Cambodian genocide in the 1970s,” said Tensley. “Working alongside renowned researchers and scholars at the Documentation Center of Cambodia, which shines a light on this tragic period of history, would allow me to add context to my broader interests in human rights and social inequality.

“I’m incredibly grateful for this opportunity, this adventure,” said Tensley, currently a M.Phil. candidate in European Politics and Society at the University of Oxford. “I’m hoping to learn as much as I can about a part of the world that I’ve yet to explore.”

Outside of class, Tensley is co-editor of EUspeak and Politics in Spires, two of the university’s online international affairs publications. His work has appeared in Time and The Week. Last year, he was one of six Oxford graduate students who were selected to represent Oxford at The Europaeum, a series of discussions at the European Parliament in Brussels, Belgium, on some of the challenges confronting Europe today.

Before graduate school, Tensley was a Fulbright Scholar in Germany, where he taught a range of bilingual classes to middle and high schoolers in the urban Ruhr area and researched modern Germany’s particular brand of multiculturalism and treatment of ethnic and religious minorities. He also served as an American Fellow of Humanity in Action and spent a summer in Denmark and Bosnia-Herzegovina.

While at Furman University, he was elected to Phi Beta Kappa and founded Men of Distinction, a local mentoring program for at-risk middle school males. He was a Furman Fellow and received the Bradshaw-Feaster Medal for General Excellence. He is the son of Joyce and Michael Tensley of Columbia.