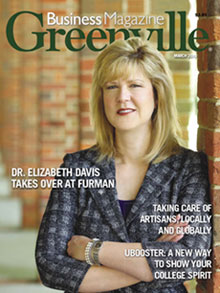 On March 19, Elizabeth Davis will be inaugurated as Furman’s 12th president. She officially began her duties as the university’s president on July 1, 2014 after coming from Baylor University, where she spent 22 years on the accounting faculty and rose to the position of Executive Vice President and Provost.  On the eve of Dr. Davis’ inauguration, where the Board of Trustees will formally confer upon her the oath of office, she was subject of a feature story in the March 2015 issue of Greenville Business Magazine.