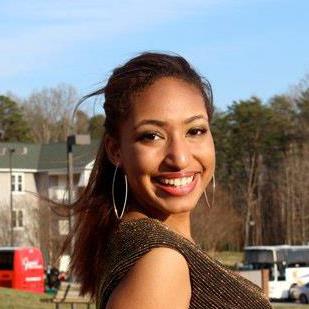 Jhanay Williams ’14 was wrestling with a life-changing decision as she approached graduation from Furman last year.

On one side, there was the safe place to purse her master’s degree: New York University, located in the city where Williams was born before moving to Ocala, Fla. On the other, though, was the adventurous—and somewhat scary—option: American University of Paris.

Her mind clouded by anxiety, Williams sought clarity where she had increasingly begun to look for it during her four years in Greenville.

“Yes. A lot,” Williams said when asked if she was nervous about the idea of moving across the Atlantic by herself. “I really fell in love with the program, but I had no plans of coming to France beforehand. . . My professors were the main sources of guidance during this time. I had to choose between NYU and Paris, and that got really hard.”

One professor in particular had become, in Williams’s words, her “own little teacher, mentor, fake mom, mix of everything.” Marie Watkins, Ph.D., associate professor of art history, was Williams’s advisor for four years, and her words helped push Williams to the other side of the pond.

“Dr. Watkins said choose the hardest path because you’ll never regret doing more,” Williams said. “It was much more of a hard journey, but I don’t regret not choosing New York at this point. It’s been an overall better experience. Plus, I’m doing global communications so I think it’s probably better for me to be global.”

Williams spoke via Skype from her office at an art startup in Paris called Artips. Working as an intern, she is helping expand the operation to English-speaking countries around the world while also satisfying one of the requirements of her Master of Arts in Global Communications, Visual and Material Culture Track.

Watkins said it doesn’t take much convincing to persuade Williams to go the extra mile, as evidenced by her art history-Chinese double major.

“She’s impressive,” Watkins said. “She just always worked so hard in her courses, but she was an unusual Furman student in not only doing internships all the time but she also worked part time, too . . . Bold, brave, resourceful—she really embraces life, and I think that’s exciting. Just with what she’s doing in getting to live in Paris. My goodness, how many people get to do that?”

Williams says she ended up adding Chinese as a major simply because she wanted to visit China as a Furman student, and once she satisfied all of the requirements to make the trip she was so close she thought she “may as well.” But art history is her love, and what she learned as an undergrad is critical to what she is doing now.

“(Artips) subscribers sign up for two to three free newsletters per week for a broad range of arts, from contemporary all the way down to medieval. It’s a great way for everyone to receive free art education without have to worry about cost or anything,” she said. “The best way to describe it is that I’m a PR contact connecting with bloggers, journalists, writers online, professors around the nation, just to see if this could be a useful tool for them. And of course the first thing they ask is what are you talking about, give me an example, and that’s just straight up art-history fact. You can’t skirt away from the issue. You have to have some knowledge of that.” 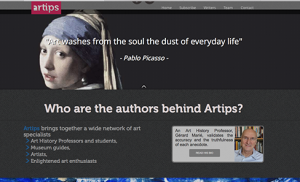 Watkins isn’t surprised the liberal arts degree has opened and will continue to open doors for her protégé.

“Her work, her life at Furman, certainly was valuable in preparing her for her life abroad, in art history especially with incorporating culture into this business program and developing websites,” she said. “Art history offers an insight and an understanding of so many different world cultures, and I think wanting to know more about the art encourages students to go and live in those cultures.”

A European life on a city college campus isn’t much like the cocooned beauty of Furman, Williams says, but Furman prepared her for this nonetheless. She will need another internship to earn her degree, and right now she’s looking at London—with no trepidation whatsoever.

“I think what helps is Furman really pushes study abroad,” she said. “I think a lot of people at Furman have a chance to go outside their comfort zone. I’ve actually seen quite a few Furman students on their study abroad while I’m here and kind of shown them around. It’s really fun.”

Learn more about the Furman Art Department and internship opportunities.