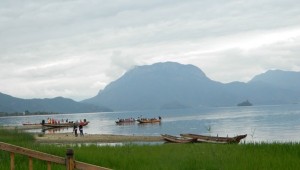 Seven filmmakers from China and the United States will converge at Furman University Thursday, Feb. 26 through Saturday, Feb. 28 for the university’s first Chinese Environmental Film Festival.

The festival features three days of experimental, documentary and feature films with environmental themes, together with expert commentary and question-and-answer sessions following each film. All films are free and open to the public. Showings will be held Thursday and Friday at Furman University’s Burgiss Theater at the Trone Student Center, and on Saturday at McEachern Lecture Hall, Room 214, Furman Hall.

Films, which range from short, 12-minute films to full-length features, include up close and personal interviews with Chinese families, discussing the effects of tourism, development and pollution on their way of life. The films also highlight little known aspects of Chinese culture, such as the Na ritual specialists from the Yunnan and Sichuan provinces of southwest China and their use of incantations to protect the environment.

“This dynamic festival will provide a unique opportunity to bring filmmakers and scholars together to share newly completed works with both Furman students and the Greenville community,” says Blumenfield, also the festival’s organizer. “With China having some of the most serious environmental problems in the world, expanding discussion about the issues and spotlighting some solutions is extremely important.”

The festival is supported by Furman University and a Luce Initiative on Asian Studies and the Environment grant, designed to encourage innovative interdisciplinary teaching, research and programming on Asia’s environment.

For more information, contact the Asian Studies Department at (864) 294-2545. A schedule of showings follows.