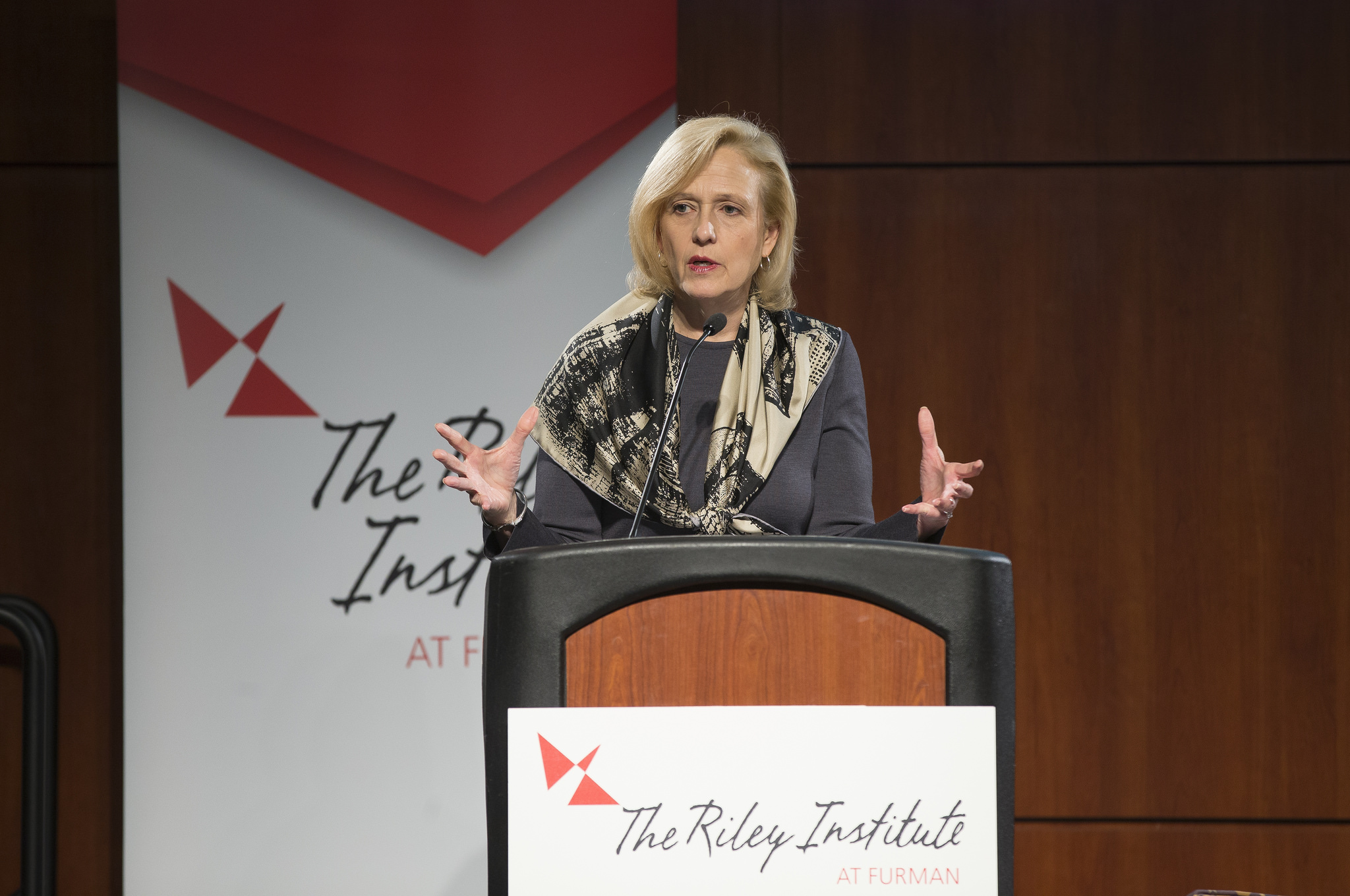 Despite changes in technology, public media’s mission remains the same—to produce and deliver quality content and bring more people to the table, improving the civic life of the country, according to three women who are leaders in the field.

Women in Public Media, a two-day symposium presented by The Riley Institute at Furman, the Department of Political Science, and South Carolina ETV, began Monday with a discussion of public media in a post-television era.

Over the past three years, public media has changed from simply television and radio broadcasting to multiple platforms, Nelsen said. Public broadcasting began in 1967 when Congress adopted the Public Broadcasting Act to provide high-quality content and educational services to broad audiences, especially those that were unserved or underserved.

Technological changes now allow public media to be delivered on multiple platforms and reach audiences that it may not have reached in the past, said Harrison. Public media was an early adopter of digital technology, building on past successes in providing high-quality content and experiences and strengthening the civil fabric of the country.

The various platforms and the content developed for them help public media provide diverse voices, she said. But public media’s mission to serve as “good stewards of the public trust” remains a core value.

Kerger said that public media has “the power to touch every American’s life” although viewing habits have changed. Viewers now have more control over how they view content.

“The one niche we really own is quality,” she said. “People are looking for the kind of content we create” and using multiple platforms allows viewers to select how they watch that content.

Public media from the beginning was an attempt to innovate and push boundaries, she said, that is continuing as PBS explores new types of storytelling to be viewed on tablets or phones or other devices.

“More and more people look at different ways they can access content,” Kerger said, but humans are social creatures and need ways of collective sharing as they watch content more individually. That’s a challenge that must be met as public media provides a forum for conversations and sharing ideas.

“Television is not a technology. It’s content,” Nelsen said.

One challenge facing all types of businesses using digital technology is how to count an audience. Huge audiences of people no longer gather around a television, Kerger said. But does it matter if the content is seen on a television set at 9 p.m. on Sunday or the same content on a tablet on Monday morning? The real issue is whether the audience is interacting with the content and whether the content is making a difference in their lives.

Half the Sky, a four-hour PBS documentary about the oppression of women and girls around the world, resonated with viewers, who tweeted and asked for ways to help these girls face the difficulties of lack of education or health issues, said Harrison.

“They wanted to do something,” she said, and public media gave them avenues to provide aid.

Public broadcasting also enables stories from local communities to be shared with national audiences over various platforms, she said.

The key to continuing success in public media, she said, is to “never betray the trust of the viewer” and to serve the American people by strengthening communities.

Learn more about the Riley Institute at Furman and upcoming events.