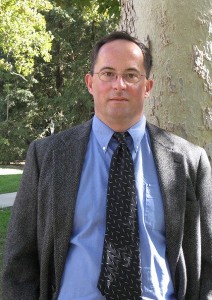 John T. Scott, Professor and Chair of the Political Science Department at the University of California at Davis, will speak on the Furman University campus Thursday, Feb. 19 at 5 p.m. in Watkins Room of the Trone Student Center.

His lecture, “God and Man in Rousseau,” is free and open to the public, and is part of Furman’s Cultural Life Program. It is co-sponsored by Furman’s Tocqueville Program and the Political Thought Club.

Dr. Scott’s primary research is in the history of political philosophy, with a specialization in early modern political thought. Most of his work in this area has focused on the thought of Jean-Jacques Rousseau, although he has also published studies of Aristotle, Machiavelli, Hobbes, Locke, Montesquieu, and Hume.

Scott’s articles have appeared in the New York Times, American Political Science Review, American Journal of Political Science, Journal of Politics, Journal of the History of Ideas, and History of Political Thought.  He is the author of The Philosophers’ Quarrel: Rousseau, Hume, and the Limits of Human Understanding (with Robert Zaretsky); the editor of Jean-Jacques Rousseau: Critical Assessments; and translator of Tzvetan Todorov’s Frail Happiness: An Essay on Rousseau (with Robert Zaretsky), Rousseau’s Essay on the Origin of Languages and Writings Related to Music, and, most recently, Jean-Jacques Rousseau’s Major Political Writings.

Scott received his bachelor’s degree from Dartmouth College and his master’s and Ph.D. from the University of Chicago.