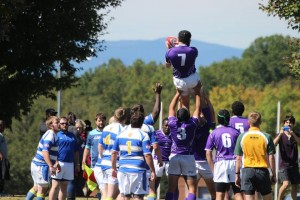 Men’s college rugby is divided into three divisions. Division 1 is for the big boys, large state universities with a sprawling campus and large enrollment. Division 2 is for the mid-sized schools, and Division 3 is for very small colleges, institutions with an enrollment of 5,000 or less.

On February 14, Furman and the University of South Carolina will compete in a match-up of highly respected D1 and D2 programs. The D2 Paladins completed the fall season ranked sixth in the country. Furman (9-2) was also crowned champions of the 12-team Southern Rugby Conference. In Columbia, the D1 Gamecocks put together another excellent season last fall, compiling a 9-2 record and winning their second consecutive Southeastern Rugby Championship. Most rugby polls had USC finishing among the top 25 D1 teams in the nation.

The A-sides for Furman and South Carolina have not met since 2009, around the time USC’s rugby roster swelled from around 25 to close to 80. The Gamecocks currently field A, B and C teams and boast one of the largest rosters in the nation. The Paladins do hold a 3-0 record against USC’s b-team.

Since Furman launched a rugby scholarship program in 2012, the Paladins have improved steadily. Last February, Furman defeated D1 University of North Carolina 29-20 at home and held advantage over another Division 1 team, the University of Georgia 17-5, in August in an abbreviated scrimmage.

Furman does hold an 8-7 overall advantage over the Gamecocks in a series that dates back to 1998. The Paladins, in fact, played their inaugural game at South Carolina, a 25-5 loss. Furman Coach John Roberts, who founded the team, is a 1990 graduate of USC where he played rugby for three years and served as club president.

“We had a nice rivalry for about 10 years or so,” says Roberts. “The program at USC really exploded about six years ago, partly due to the popularity of high school, and they quickly elevated separated from us. So we started playing their second team because we wanted the games to be competitive. In the last year or two, I think we have closed that gap a little bit.”

Roberts, who has deep ties with USC program, says the Gamecock’s fast-paced offense will present challenges for Furman. The Gamecocks scored an average of 38 points in the fall.

“They move the ball quickly. It does not stay on the ground very long. They have a very dynamic backline,” says Roberts. “We will need to be sure tacklers and communication will be vital. As the team progresses, we are aiming to schedule more games against larger, more established, programs.”

USC holds a 1-1 record this year and is coming off a 22-20 win over North Carolina State. South Carolina Coach Mark Morris, the 2014 SEC Coach of the Year, has a lot of respect for the Furman program.

“Playing one of John’s coached Paladins teams is always a competitive match. John has always done a great job taking the players he recruits and turning them into a great disciplined rugby team,” said Morris. “He always has them prepared to compete and regardless of the opponent’s rankings or being from a higher division. John’s teams always play hard, smart and for the win. Although Furman is playing in Division 2, John always  has the team competing at the highest level and they are usually more competitive than some of the teams competing in the D1 SEC and D1  ACC.

The February game is a non-conference “friendly” contest between the teams. Generally, 15s rugby is played in the fall. The bulk of the spring is devoted to 7s, a faster, shorter version of 15s. Many programs, though, do pepper their spring schedule with a few 15s games.