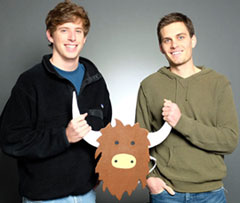 Yik Yak, a mobile, anonymous social network with apps for Android and iOS, launched in November 2013 and has been a huge hit on college campuses ever since. “You can think of it as a local, anonymous Twitter or a local virtual bulletin board,” says co-founder Tyler Droll, who started the site with friend and fellow 2013 Furman graduate Brooks Buffington. Time magazine wrote an article about Yik Yak and its rapidly growing success. The company thus far has generated two million users and $72 million in venture capital.