Margaret McCurry ’18 donned a comfy pair of pajamas and settled in for the night. Other than her 13 hair “accessories,” she looked like a typical college freshman getting ready for bed.

It’s 11 p.m. and McCurry is feeling a little sleepy. “Do you think you might need another pillow?” she’s asked.

“That would be nice,” McCurry responded.

Her stylishly-decorated room could have come out of an Ikea catalog. But in this case, McCurry’s room and the matching room next door in Johns Hall are the hub of a new and ever-growing undergraduate research program at Furman University.

Psychology professor Erin Wamsley, Ph.D., is the driving force behind the new Sleep and Cognition Laboratory, which opened last May. Wamsley came to Furman last year from the faculty of the Division of Sleep Medicine at Harvard Medical School, impressed by Furman as a liberal arts institution that is serious about undergraduate research.

By this fall, more than 100 undergraduate students, mostly from Furman, had participated in sleep studies headed up by Wamsley and her team of researchers.

Since a third of a person’s life is spent sleeping, Wamsley is hoping to find questions to a host of questions about sleep and memory, including how memories are transformed during sleep, how emotion influences memory processing during sleep, and why and how the sleeping brain generates dreams.

She’s hoping to add more to the big picture of how human memory works, both long-term and short-term. “When you learn something, the life of a memory is not over,” she said.

Wamsley also hopes her research will assist in treating psychiatric disorders, since sleep is often disrupted in those diagnosed with depression, schizophrenia, or post-traumatic stress disorder.

One study, a collaboration with Robert Stickgold, a Harvard Medical School professor and the director of the school’s Center for Sleep and Cognition, looks at the effect of rest and sleep on human memory.

Evidence has shown that animals have replayed memories in their brains when they fall asleep, Wamsley said. The goal of the research project, funded through a grant from the National Institute of Mental Health, is to establish patterns of brain activity in humans that show this “reactivation” of memory.

Quiet rest, also called resting wakefulness, and its effect on memory was the focus of a second study, which included 26 participants. They each listened to a short story, immediately recalled everything they could remember about the story, and then spent the next 15 minutes either resting with their eyes closed or playing the computer game Snood.

Results of the study showed quiet rest led to greater improvement in memory, compared to staying in an active state with a computer game. “This study supports the hypothesis that even a short period of rest can support memory under optimal conditions,” according to results of the EEG study, which Furman students presented at a neuroscience research event in Washington, D.C., this fall.

“It is becoming increasingly clear that the so-called ‘resting’ brain is actually hard at work processing recent experience, integrating new memories into existing semantic networks and preparing us for the future,” Wamsley said.

Dozens of Furman students are participating in a third study that looks at how recent learning experiences are processed during sleep and incorporated into dreams.

For students volunteering to participate in the two-part study, their evening starts as 13 electrodes are applied using multi-colored wires: six on their head, one by each eye, two on the chin, one behind each ear, and one on the forehead. 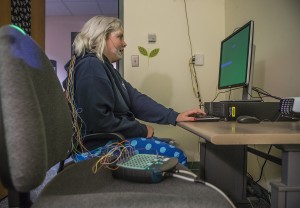 Students then participate in cognitive tasks, including typing for a motor sequencing task, and then by playing a video game that asks them to navigate their way through a three-dimensional maze. The sleep lab “bedroom” is set up with typical bedroom furniture and decorations to make students feel as relaxed and comfortable as possible, Wamsley said.

Throughout the night, sleep lab coordinator Yvette Graveline monitors students’ brainwaves using polysomnography and may wake students up as many as 12 times to ask them to provide reports of what they are dreaming.

“This is the fun part. We’re going to let you fall asleep,” Graveline tells McCurry. “You’ll hear, Margaret, please report now. Describe as many details as possible of what you were thinking right before I wake you up—sounds, how you felt, people you saw, what things looked like.”

McCurry was excited to participate in the study, especially after studying about causes of stress in her Wellness Concepts class at Furman. “I’ve always had strange dreams regularly,” she said. “I hope I can gain some insight into what they mean or why they happen.”

The following morning, volunteers have their memory tested again.

Sleep studies have proven popular with both student volunteers and research assistants alike. Students receive $70 for participating in an overnight sleep study and $10 for assisting with the daytime study. There is currently a waiting list for volunteers, Wamsley said.

After spending the summer working at the EEG lab at the University of California, San Diego, neuroscience major Matt Whitmire ’15 of Fort Mill said he is thrilled to have a hands-on opportunity to explore his career interests in a very real way. He is working between 10 and 14 hours each week as a research assistant in the Sleep and Cognition Lab this year.

The skills learned in the Sleep and Cognition Lab—practicing analytical skills and solving problems in a team—are “essential preparation” for graduate school and medical school, Wamsley said.

“It’s a whole different side of the field,” said Whitmire, who plans to attend graduate school after Furman. “Furman has given me so many opportunities to go different places and do good work. It’s really going to help me with the career I’d like to pursue.”