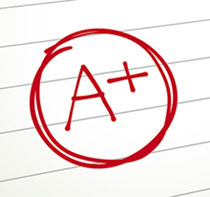 Average college GPAs in 2006 were much higher than they were in 1930, according to a study published in the Columbia University-based publication Teachers College Record. Stuart Rojstaczer, a writer and former science professor, co-authored the study with Furman computer science professor Christopher Healy.  Healy, who joined the Furman faculty in 1999, was quoted in an article in The Atlantic magazine about grade inflation and how it can ultimately undermine students’ achievement.

Tagged Computer Science, In the News