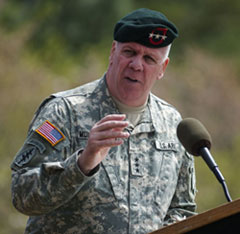 Lt. Gen. John F. Mulholland, Jr., a 1978 Furman graduate, has been named associate director for military affairs at the CIA. He was previously deputy commander of U.S. Special Operations Command at MacDill Air Force Base, Florida, and, before that, commanded U.S. Army Special Operations Command at Fort Bragg from November 2008 until July 2012. He also led the first Green Berets on the ground in Afghanistan. His military awards include the Distinguished Service Medal, Defense Superior Service Medal and the Legion of Merit. Read more in the Fayetteville (N.C.) Observer.