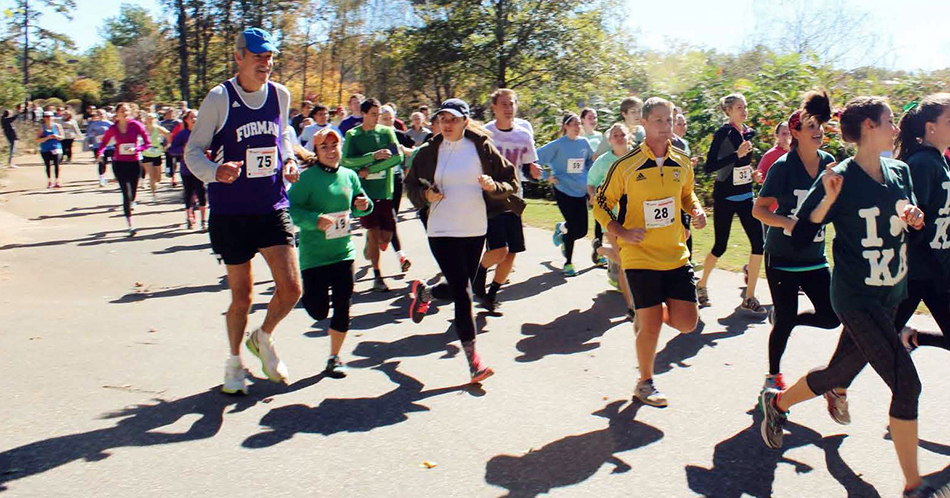 While the sorority has sponsored an annual 5K Shamrock run for the past nine years, members wanted to make the 10th anniversary event even bigger, said Katie Keith ’16, vice president of community service for Kappa Delta. Planning for this year’s fund-raiser spaghetti dinner, silent auction, and 5K run began last spring with “all hands on deck,” she said.

Approximately 200 Furman students, faculty, staff, and community members participated in the recent Shamrock Run in November around Furman Lake. Among them was Communication Studies Professor John Armstrong, an avid runner who ran in this fall’s Mohawk-Hudson Marathon in Albany, N.Y. and has participated in several Shamrock Runs over the years.

“Many of my communication studies students are in Kappa Delta and I wanted to support their charitable efforts,” said Armstrong, who won the 25-plus age category and received a repurposed vinyl record as a prize medal. 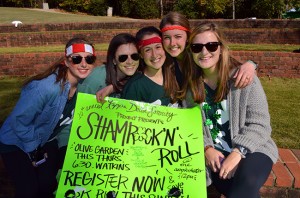 Among the race participants were multiple clients from Furman’s FitRx program, a new individualized exercise training available to university faculty, staff, and members of their families.

“We had a few clients actually train for this event,” said Keith, a double major in health sciences and art who also works as an intern in the FitRx program. “We’re so proud of their effort and commitment.”

Harrison Rose ’15 and members of local bluegrass band, Bent Strings, provided music in the amphitheatre for the race. Emma Smith ’17 and Emily Martin ’17 served as co-Shamrock chairs to help coordinate the event.

As part of a separate event, Olive Garden restaurant at Cherrydale donated a spaghetti dinner for 200 people, while Kappa Delta members provided salad, desserts, and drinks for the fundraiser at the Watkins Room.

“The center provides invaluable services for both victims and survivors of sexual assault and rape, from immediate services such as meeting a victim at the emergency room to follow-up services such as counseling for survivors,” Bereznay said. “These services help so many people in our community recover from traumatic situations.”

Keith said she’s proud that Kappa Delta has been able to support local organizations like the Julie Valentine Center again this year. “They’re investing in the futures of this community,” she said. “We’re so proud that we’re able to do a little bit to support their amazing work.”