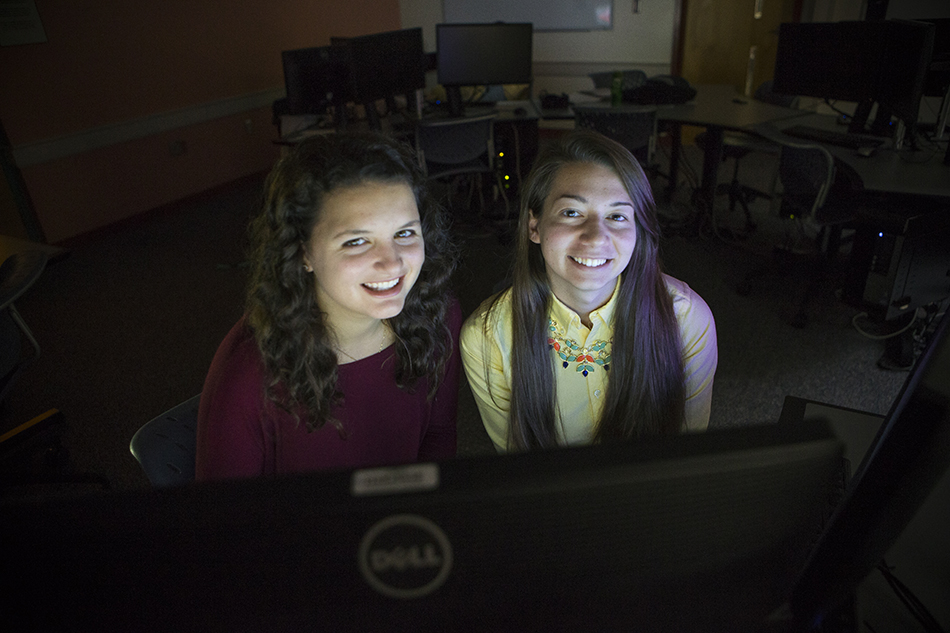 But they often do think they’re better—than everyone. Sometimes it’s delusion, but justified or not that confidence goes a surprisingly long way according to Furman computer science department chair Kevin Treu.

“Men tend to be very cocky and very territorial when it comes to computers. Think of boys playing video games and stuff like that. And even if they are ‘C’ students they’ll believe themselves to be much better than that,” he says. “Women who are very adept at logical, rational thinking have these crushing self-confidence issues. I’m generalizing, but that is really a very interesting thing to note, that all these aggressive boys have chased away the girls in a sense.”

Before you go lumping Treu in with the cavemen, hear him out. It’s a fact that women are hugely under-represented in the field, and he has deep familiarity with the theories why because one of his main goals is to change the situation. That’s the biggest reason Haley Cottingham ’17 and Andreea Cirstea ’17 ended up in Phoenix in early October at the Grace Hopper Celebration of Women in Computing conference.

“I have been involved in investigating the issue, and it really is an issue, of the dearth of women in my field, in computer science, for years now in fact,” Treu said.

Dr. Grace Hopper was a rear admiral in the Navy and will always be one of the most significant figures in computer science, male or female. She was a co-inventor of the Harvard Mark I computer before leading a team that invented COBOL (Common Business-Oriented Language), the first user-friendly software program that is now the backbone of world business-computer programming language.

And she did it by bringing something to the table that men often do not: By starting out with a belief that programs should be written in a language that was close to English rather than machine code.

“This is not a stereotype, this is actually documented by social-science research that women are far more interested in the connections, they’re interested in the bigger picture, they’re interested in not just this machine as an artifact unto itself but as a tool to bring people closer together or to help people,” Treu says. “I think that’s my favorite theory for why women just left . . . Computer science as a discipline failed to keep up with the way that computing evolved in the eyes of society at large.”

“We continue trudging down this path of teaching computer science as an end unto itself, how to program the computer and how to make it work and how to make it go faster and all those really nerdy things,” he continues. “And we completely lost sight of the fact that society was more interested in ‘how can we use these?’”

But times are changing. Cottingham, a native of Charleston, S.C., and Cirstea, who is from Atlanta represent two of the 10 female computer science majors at Furman. That’s still only 20 percent of the total but a far cry from a low of two just a few years ago.

“That I think is a very common mindset, that computer science is going to be sitting and staring at a computer and stubbornly refusing to give up on this problem until you’ve fixed this piece of code. But what’s so interesting about the field is it’s so much more,” Cottingham says. “For example, working with people, user experience, user interface. That’s actually what I am interested in is working with the user, and sort of translating that to people in the dark room who are doing the hard engineering.”

Approximately 8,000 people converged on the Phoenix Convention Center for the three-day event, earning the Grace Hopper its title of “world’s largest gathering of women technologists.” Speakers included Shafi Goldwasser, a professor of electrical engineering and computer science at MIT, Maria Klawe, a computer scientist and president of Harvey Mudd College, Satya Nadella, CEO of Microsoft, and Arati Prabhaker, director of the Defense Advanced Research Projects Agency (DARPA), and the career fair was “just out of this world,” according to Cottingham, featuring “every company you could possibly imagine.”

The Anita Borg Institute produced the conference and offered scholarships to students, which both Cottingham and Cirstea took advantage of.

“Haley and I both attended workshops that taught us how to stand out from the crowd in a positive way,” Cirstea said. “For me, the career fair was the most beneficial because I not only got to see what type of questions they ask but the difference between behavioral interviews and purely technical interviews or a combination of both. And I learned most of the time if you’re the smartest person at the table then you’re usually at the wrong table. That gives me a whole new perspective on life because I always want to be learning and I want to help people around me.”

Cirstea became interested in computer science while taking intro to computer science with Dr. Andrea Tartaro followed by intro to programming, and she left the conference with internship offer from J.P. Morgan Company. Both she and Cottingham acknowledged the scarcity of women in their field, and Grace Potter gave them many tips on how to manage that.

“I talked to a few older people who had been there before, and one of my favorite pieces of advice was to not downplay. It’s something that I’m prone to, and I think it’s something that a lot of women in the field are prone to. ’It really wasn’t that big of a deal, or I did this thing but I had a lot of help. I wasn’t the leader.’ Just go ahead and say ‘these are my accomplishments, this is what I’ve done, and I’m proud of them,’” she said. “There they are, and don’t feel like you have to qualify everything you present about yourself.”

That includes advertising your unique talents.

“People who have more of a holistic approach to (computer science) ultimately can get more done. That can be a woman or a man,” Cottingham said. “In general when you approach it using the skills and tools that you’ve gained from all different experiences rather than just trying to solve a problem with engineering and math it ultimately produces better results.”

One of Treu’s top goals is to continue to increase female interest, which is why he’ll continue to promote Grace Hopper and others like it.

“Haley and Andreea are examples of women who have swallowed the Kool-Aid, so to speak,” he said. “From my perspective as department chair this was a very valuable opportunity to provide to our female students. I actually offered for even more to go, but only Andreea and Haley took me up in it. But this is the kind of thing at Furman that we will find the money to make it happen if we can. That’s what Furman is about.”