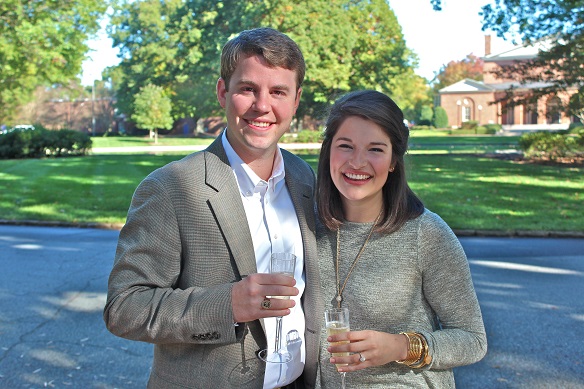 It has been said that many Furman students end up marrying each other, whether they graduate together or find their way back to each other years later. Homecoming was extra sweet for one couple this year; not only did they reunite with some of their fellow graduates, they also got engaged. David Ellington and Ashlyn Ayres, both graduates from the Class of 2013, began their relationship between the Furman gates: a place where traditions began and a future was made.

We had the opportunity to interview David and Ashlyn about their proposal story.

Patce: How and when did you and Ashlyn meet?

David: Ashlyn was working in the Vinings [off-campus Furman housing] and I came into the office to ask some questions before moving in mid summer. She was wearing this incredible black dress and looked so beautiful I had to ask her out. So I did under the disguise of a “going away dinner” since she was leaving for her week long family vacation. In hindsight, the going away dinner wasn’t as good of a disguise as I thought.

Ashlyn: Furman is unique in the sense that you know of people without  knowing everyone, and David and I didn’t really know each other until that summer. Thank goodness for the Vinings!

P: Tell us a little bit about your dating experience at Furman and any special traditions you shared.

D: Furman gave us a year of fun dating that was easy thanks to our overlapping social groups. That year gave us a strong foundation for when we graduated and did a year of long distance before I moved to Atlanta to be with Ashlyn.

A: Our walks — we must have walked miles and miles around Furman’s campus, and still do when we are in Greenville.

P: How did David propose? Was there any significance to him proposing on the mall?

A: Yes, lots of significance! Senior year during homecoming week, we were sitting on the mall sign waiting for friends and a woman who worked at Furman walked by on her way to the parking lot. She asked to take our picture for Homecoming (Thank you, mystery woman! You started an incredible tradition for us). Since then, we have taken a picture at the mall each fall, so when David was proposing he knew this was a special tradition for us and a normal thing to do. My sweet friend, Allie Blalock ’13, offered to take our picture and David kept asking for one more “just in case” or because he “blinked.” He got down on one knee and started crying and I realized what was happening. He asked, I said yes! Little did I know both of our families were watching from behind the Chapel Lot hedges. We heard whistling and clapping and they all came out with champagne.

P: How did you celebrate your engagement?

A: After toasts and champagne on the mall we went to Roost where all of our friends were waiting (and even some who had driven overnight to be there). It was such a testament to the strong friendships that grow at Furman. We are both so overwhelmed by the love and support we have received from our Furman community.