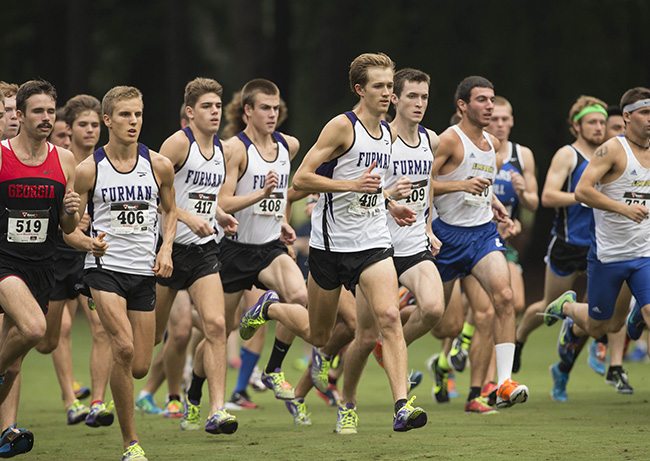 Cate Pichon Fenster ’93 remains the only Furman runner to ever compete in the NCAA cross country championship meet, a feat she pulled off in 1991. There is a very good chance that will finally change this weekend.

Fresh off their second straight Southern Conference titles, the Paladin men’s and women’s teams will compete in the Southeast Regional Championships on Nov. 14 in Louisville, Ky. There are nine regional meets, and the top two finishers in each earn automatic bids to the NCAA Championships to be held Nov. 22 in Terre Haute, Ind. Thirteen schools also receive at-large bids.

The men, who until last year hadn’t even won the conference since 1976, are seeded first, and third-year coach Robert Gary doesn’t mince words about his team’s chances of making Furman history.

“I don’t think we need to have a crazy, miracle race by any stretch. If we run as well as we have I think the men’s program will make it,” he said. “Now, it’s tough. We’re just a really young team. A lot of the freshmen at some of the bigger schools redshirt, and we didn’t do any of that. If you’re here it’s time to get going. That’s about the only thing we’re worried about is how young they are and the distance moving from 8K to 10K.”

If the Paladins’ performance at the SoCon meet held on Halloween in Kernersville, N.C., is any indication, he has good reason to be confident. Furman became the first school to ever win back-to-back men’s and women’s Southern Conference championship simultaneously, but the real story was the Paladins’ record-breaking dominance. The women posted the lowest score in the 29-year history of the competiton with 22 points, and amazingly the men were even better with a perfect 15 points that resulted from sweeping the top five individual finishers.

No Southern Conference men’s team had done that since East Tennessee State’s three-year run of perfection from 1980-82, which matched William & Mary’s trio of 15s posted from 1972-74, and Furman set a mind-boggling record that can never be broken when its nine individuals beat every other runner from every other school.

Senior Tripp Hurt led the way by becoming Furman’s first male individual conference champion since Dennis Patterson in 1962, crossing the line in 24:18.63 to cap a career that saw his league meet finishes improve from 12th to seventh to fourth last year. The SoCon Runner of the Year, who was also named first-team all-conference for the third straight season, was followed by 2013 SoCon Freshman of the Year Troy Reeder (24:18.83), 2014 SoCon Freshman of the Year Aaron Templeton (24:18.88), sophomore Tanner Hinkle (24:18.92) and sophomore Brock Baker (24:23.56).

On the women’s side, sophomore Allie Buchalski took the women’s individual title with a time of 16:44.42 a year after finishing second to become Furman’s first winner since Megan Lordi in 2008. The Paladins claimed three of the top five spots and six of the top 10, with senior Sinead Haughey coming in second with a time of 16:45.76 followed by sophomore Julia Rodriguez (fourth), 2014 SoCon Freshman of the Year Emma Mashburn (seventh) and sophomores Grace Tinkey (eighth), Laura Miller (ninth), Maddie Wolfe (21st) and Bryce Seymour (31st).

The Paladin men earned the first national ranking in program history when they finished second at the Virginia/Panorama Farms Invitational on Sept. 26 in Charlottesville, Va., and they finished fourth at the Pre-NCAA Invite on Oct. 18 in Terre Haute behind top-ranked Colorado, second-ranked Oregon and Georgetown. Furman has climbed to 16th nationally and first in the Southeast Region. The women are ranked ninth in the region.

Gary was SoCon Coach of the Year for the second consecutive season.
“The women would be a little bit of a long shot to make the national meet, but the men, just going on a piece of paper, we probably should so that’s pretty exciting,” he said. “It doesn’t feel like a whole heckuva a lot of pressure.”

An influx of money from the Blue Shoes program has rejuvenated the long-underfunded sport at Furman, and Gary hopes the Paladin community, which sees few and far between NCAA championships, will start to take notice.

“Sometimes I think at Furman for some reason athletics is kind of tip-toeing around and hoping nobody notices as opposed to hey, there’s something really great going here,” Gary, a two-time Olympian who came to Furman from Ohio State, said. “When we came home from the SoCon, a bunch of the sports had come out to meet us, we had a police escort, President (Elizabeth) Davis came out to congratulate us, so those kind of things are really great. And I hope to set a tradition where we expect to win the SoCon and I hope we except to make the national meet every year.”

And Gary has no plans to stop there.

“Then it’s just a matter of can you get a trophy, and that’s our ultimate goal inside the next four years. You get a trophy for top four at the NCAA meet, so having both genders shooting towards that will be really exciting,” he said. “There’s only a handful of schools that really talk about that on a yearly basis, only five or six out of the 350 cross country programs in the country. … In that little nerdy track-and-field world, there’s a lot of buzz and a lot of people are really taking notice that a small liberal-arts school in South Carolina is a player on the national scene on the men’s side and soon to be the women’s.”

Hurt was also the Southern Conference Cross County Runner of the Month for September, and he and Buchalski were the SoCon Cross County Athletes of the Month for October.
Furman’s 2013 women’s team title broke a 13-year drought. They notched their first three championships in 1993, ’94 and ’95 behind three-time individual champion Heather VandeBrake Hunt ’96 and added another in 2000. The men also won in 1961 and 1965.