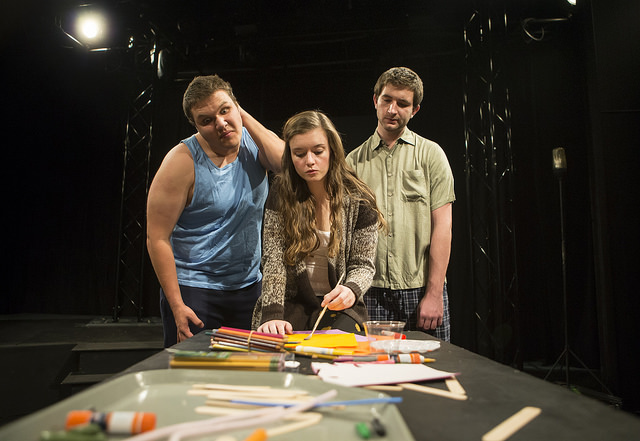 In this case though, this “fair lady” isn’t selling flowers and learning proper English. She’s getting a crash course in baseball and selling pictures of chickens.

Furman University Theatre’s latest production, The Sweetest Swing in Baseball, takes a sobering look into the world of mental illness, but it doesn’t forget its sense of humor.

The show, by playwright Rebecca Gilman a decade ago, tells the story of Dana Fielding, a rising star painter who attempts suicide after critical reviews of her latest work and a break-up with her boyfriend, Roy.

Caitlin Cain ’15 plays the afflicted Dana, a role previously played by Gillian Anderson in London during a run in 2004.

After the failed suicide attempt, Dana finds herself in a mental institution where she befriends, Gary, a sociopathic stalker, hilariously played by Sal Donzella ’17, and a recovering alcoholic, Michael, endearingly played by Sam Feigenbaum ’15. After finding out Dana’s basic health insurance plan will only pay for 10 days of care, the two become unlikely therapists and coaches as the trio concoct a plan to help Dana stay longer.

“Do you think I could fake something?” Dana asks.

While she doesn’t choose scary, Dana does make the unlikely personality choice of Darryl Strawberry, the legendary 6’6” African-American Major League baseball outfielder with the “sweetest swing in baseball.”

For Furman students performing in the show, the play meant making a statement on some very relevant topics.

“Mental illnesses are serious issues and are not treated as such, either by the people that surround Dana or by her insurance company,” said Courtney Dorn ’18, who played the dual role of Rhonda, an art dealer, and mental health physician Dr. Gilbert. “It’s an important issue that is often overlooked and swept aside with an “oh, you’ll get over it” and that is just not the case, especially for Dana.”

For Savannah Klosowski ’18, who also plays dual roles as Erica, an art agent, and mental health physician Dr. Stanton, the show was a reminder of what it means to be successful.

“As we have further cultivated this show, I have come to appreciate the message of success and happiness through the eyes of the beholder rather than the desperate search for approval from secular society,” said Klosowski. “I think this show has the potential for incredible laughs and great connections with different characters.”